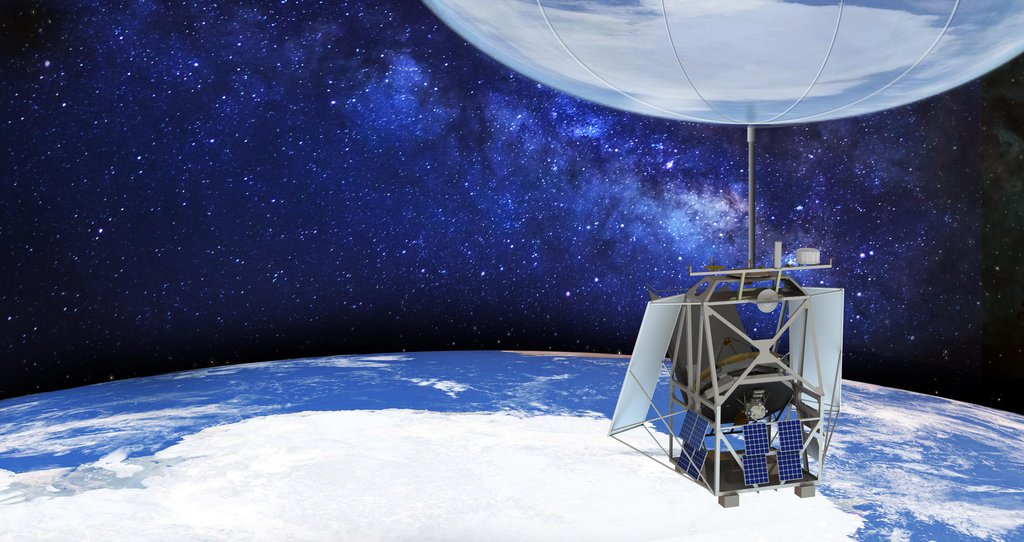 NASA's Astrophysics Stratospheric Telescope for High Spectral Resolution Observations at Submillimeter-wavelengths (ASTHROS), seen in this illustration, is a high-altitude balloon mission for studying astrophysical phenomena. Scheduled to launch no earlier than December 2023 from the agency's Long Duration Balloon Camp near McMurdo Station in Antarctica, ASTHROS will aim to fly for 21 to 28 days at an altitude of about 130,000 feet (24.6 miles or 40 kilometers). At that altitude, ASTHROS can observe wavelengths of light blocked by Earth's atmosphere.

When fully inflated, the 40 million-cubic-foot helium balloon will be about 400 feet (150 meters) wide, or roughly the size of a football stadium. The ASTHROS telescope features a lightweight 8.4-foot (2.5-meter) primary mirror to collect far-infrared light – one of the largest to ever fly on a high-altitude balloon mission. Balloon missions typically cost less than space missions and take less time to move from early planning to deployment. They also employ new technologies that can then be used on future space missions.

The mission's main science goal is to study stellar feedback, the process by which living stars disperse and reshape clouds of gas and dust that may eventually form new stars. Feedback regulates star formation in many galaxies, and too much can halt star formation entirely. ASTHROS will look at several star-forming regions in our galaxy where feedback takes place, and at distant galaxies containing millions of stars to see how feedback plays out at large scales and in different environments.

A division of Caltech in Pasadena, California, NASA's Jet Propulsion Laboratory manages the ASTHROS mission for the Astrophysics Division of the agency's Science Mission Directorate in Washington. JPL is also building the mission's scientific payload. The Johns Hopkins University Applied Physics Laboratory in Laurel, Maryland, is developing the gondola and pointing systems. The payload cryocooler was developed by Lockheed Martin under NASA's Advanced Cryocooler Technology Development Program. Other key partners include Arizona State University and the University of Miami. ASTHROS' high-performance carbon fiber parts were produced by Persico Marine in Nembro, Italy, and Lamiflex S.p.A in Ponte Nossa, Italy.

NASA's Scientific Balloon Program, and its Columbia Science Balloon Facility, in Palestine, Texas, will provide the balloon and launch services.

ASTHROS will be launched from NASA's Long Duration Balloon Facility in Antarctica, near McMurdo Station. McMurdo Station is managed by the National Science Foundation through the U.S. Antarctic Program.