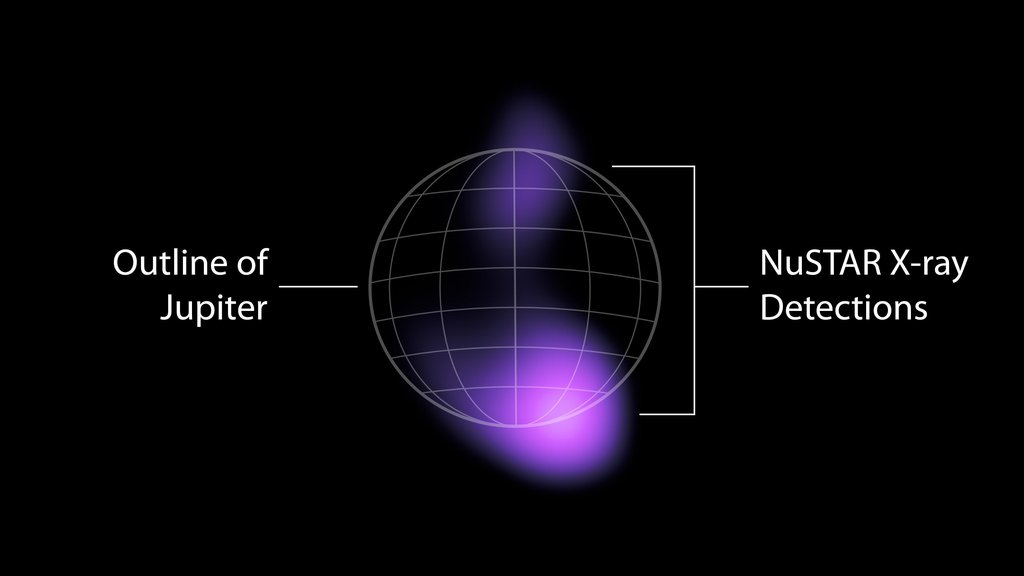 The areas where high-energy X-rays were detected by NASA's NuSTAR (Nuclear Spectroscopic Telescope Array) from the auroras near Jupiter's north and south poles are shown in purple in this graphic. The emissions are the highest-energy light ever seen at Jupiter and the highest-energy light ever detected from a planet in our solar system other than Earth. The light comes from accelerated electrons colliding with the atmosphere. NuSTAR cannot pinpoint the source of the light with high precision, but can only find that it is coming from somewhere in the purple-colored regions.

X-rays are a form of light, but with much higher energies and shorter wavelengths than the visible light human eyes can see. NASA's Chandra X-ray Observatory and the ESA (European Space Agency) XMM-Newton observatory have both studied X-rays from Jupiter's auroras – produced when volcanos on Jupiter's moon Io shower the planet with ions (atoms stripped of their electrons). Jupiter's powerful magnetic field accelerates the particles and funnels them toward the planet's poles, where they collide with its atmosphere and release energy in the form of light, including X-rays.

Electrons from Io are also accelerated by the planet's magnetic field, according to observations by the Jovian Auroral Distributions Experiment (JADE) and Jupiter Energetic-particle Detector Instrument (JEDI) on NASA's Juno spacecraft, which arrived at Jupiter in 2016. Researchers suspected that those electrons should produce even higher-energy X-rays than those observed by Chandra and XMM-Newton, and the NuSTAR detections confirm that hypothesis.

The high-energy X-rays are relatively faint, and required a week of NuSTAR observations to detect. Scientists have detected X-rays in Earth's auroras with even higher energies than what NuSTAR saw at Jupiter, but those emissions can only be spotted by small satellites or high-altitude balloons that get extremely close to the locations in the atmosphere that generate those X-rays.

NuSTAR launched on June 13, 2012. A Small Explorer mission led by Caltech and managed by JPL for NASA's Science Mission Directorate in Washington, it was developed in partnership with the Danish Technical University and the Italian Space Agency (ASI). The telescope optics were built by Columbia University, NASA's Goddard Space Flight Center in Greenbelt, Maryland, and DTU. The spacecraft was built by Orbital Sciences Corp. in Dulles, Virginia. NuSTAR's mission operations center is at the University of California, Berkeley, and the official data archive is at NASA's High Energy Astrophysics Science Archive Research Center. ASI provides the mission's ground station and a mirror data archive. Caltech manages JPL for NASA.

JPL manages the Juno mission for the principal investigator, Scott J. Bolton of the Southwest Research Institute in San Antonio. Juno is part of NASA's New Frontiers Program, which is managed at NASA's Marshall Space Flight Center in Huntsville, Alabama, for the agency's Science Mission Directorate. Lockheed Martin Space in Denver built and operates the spacecraft.