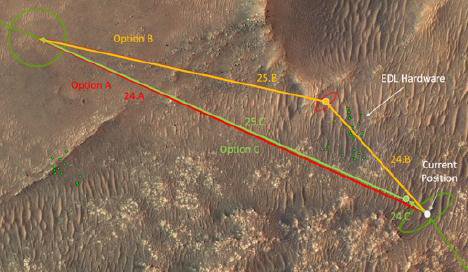 This annotated overhead image from the HiRISE camera aboard NASA's Mars Reconnaissance Orbiter (MRO) depicts three options for the agency's Mars Ingenuity Helicopter to take on flights out of the "Séítah" region, as well as the location of the entry, descent, and landing (EDL) hardware. The size and location of the landing ellipses have been analyzed to be safe for landing – free of hazards such as rocks, dunes, and large slopes. See an interactive map with Perseverance and Ingenuity location updates here: https://mars.nasa.gov/mars2020/mission/where-is-the-rover/

NASA's Jet Propulsion Laboratory, a division of Caltech in Pasadena, California, manages the Mars Reconnaissance Orbiter Project for NASA's Science Mission Directorate in Washington. The University of Arizona, in Tucson, operates HiRISE, which was built by Ball Aerospace & Technologies Corp., in Boulder, Colorado.