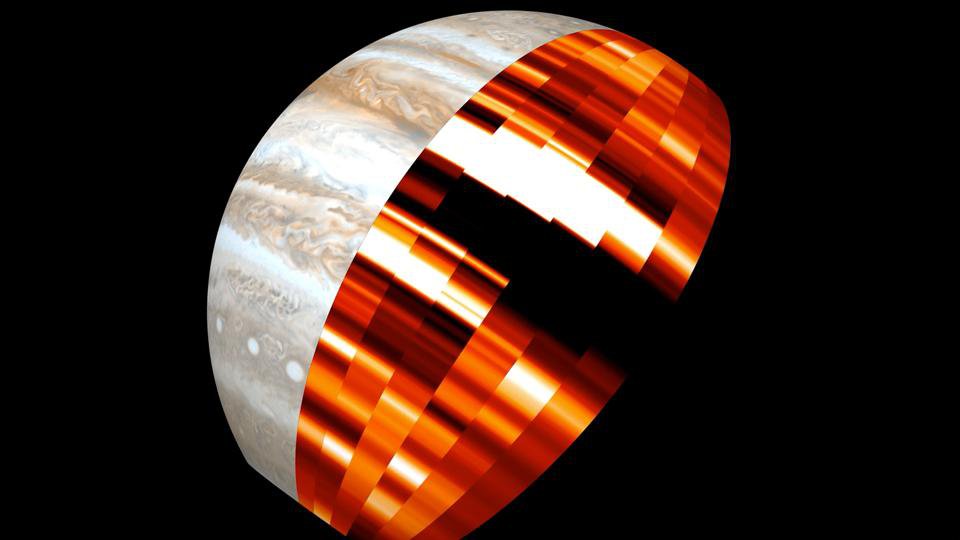 This animation depicts Jupiter's banded appearance in microwave light as seen by the microwave radiometer instrument (MWR) aboard NASA's Juno spacecraft. The instrument contains six microwave channels that peer progressively deeper below the visible cloud tops. The bottom layer is MWR's channel 1 which is the longest wavelength channel and is sensitive to the deepest depths. Each of the other channels is sensitive to progressively shallower depths. The three shallowest channels are shown on the left, where Jupiter's mid-latitude "belts" are microwave-bright in the microwave portion of the electromagnetic spectrum, and "zones" are microwave-dark. The three deepest channels, which probe below the water clouds, are on the right, where belts and zones become dark in microwave light.

The Juno science team uses the term "Jovicline" to describe the transition zone where belts become microwave-dark as depth increases, and where zones become microwave bright. It generally occurs between MWR's third and fourth channels – the same region as Jupiter's water clouds, some 40 miles (65 kilometers) down into the atmosphere.

The MWR instrument enables Juno to see deeper into Jupiter than any previous spacecraft or Earth-based observations.