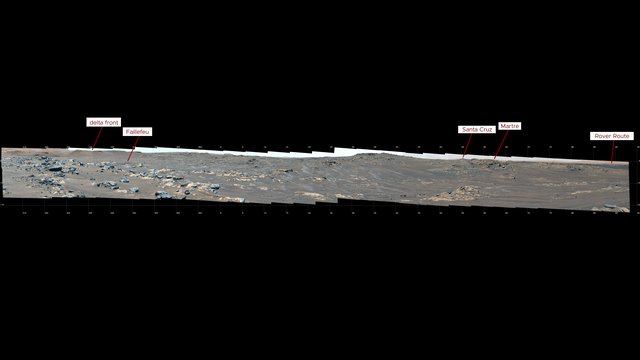 This mosaic features a rover-eye view of the "South Séítah" geologic unit of Jezero Crater. Composed of 84 enhanced-color images that were later stitched together, the mosaic was taken on Sept. 12, 2021 (the 201st Martian day, or sol, of the mission), by the Mastcam-Z imager as the rover was parked on an elevated overlook just outside its entry point into South Séítah.

An annotated version of this image (Figure 1) indicates the location of several prominent geologic features. At the top left and running about a third of the way to the center of the image is a portion of the delta front, a river delta that billions of years ago fed the lake at Jezero Crater. Below and to the right of that is a ridge nicknamed "Faillefeu" (after a medieval abbey in the French Alps). Farther to the right, at the top of the image is the distant peak called "Santa Cruz." While not a planned destination of the rover, Santa Cruz is geologically interesting since it has mineral signatures – seen both from orbit and by the rover (from its landing site) – consistent with alteration minerals, primarily clays.

Near the top at the far right is a portion of the route Perseverance took to get to this location. At the time, Perseverance was traveling south, skirting the outside of the Séítah geologic unit. To the right (and out of frame), Perseverance would take a hard right and head northwest along a ridgeline just outside of Séítah.