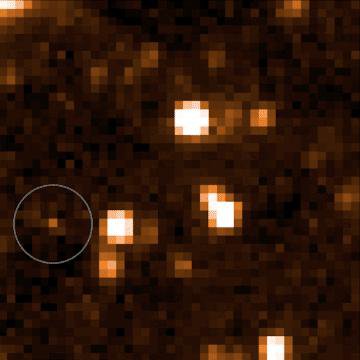 This video shows data from NASA's Near-Earth Object Wide-Field Infrared Survey Explorer (NEOWISE), launched in 2009 under the moniker WISE. The moving object in the bottom left corner is a brown dwarf officially named WISEA J153429.75-104303.3 and nicknamed “The Accident.”

The Accident was discovered by citizen scientist Dan Caselden, who was using an online program he built to find brown dwarfs in NEOWISE data. Caselden's program attempted to remove the stationary objects emitting infrared light (like distant stars) from the NEOWISE maps and highlight moving objects that had characteristics similar to those of known brown dwarfs. He was looking at one such brown dwarf candidate when he spotted WISEA J153429.75-104303.3, which hadn't been highlighted by the program because it did not match the program's profile of a brown dwarf.

The Accident confused scientists because it was faint in some key wavelengths, suggesting it was very cold (and old), but bright in others, indicating a higher temperature.

A study in the Astrophysical Journal Letters posits that The Accident might be 10 billion to 13 billion years old – at least double the median age of other known brown dwarfs. That means it would have formed when our galaxy was much younger and had a different chemical makeup. The paper's authors think The Accident's brightness in certain wavelengths is an indicator that it contains very little methane, meaning it probably formed when the Milky Way was still young and carbon-poor. (Methane is composed of hydrogen and carbon).