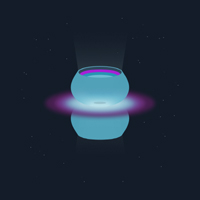 This illustration shows the object known as SS 433, located in the Milky Way galaxy and only about 20,000 light-years from Earth. Researchers think SS 433 is an ultraluminous X-ray source, or ULX, a compact cosmic object that must have an X-ray luminosity that is about a million times the total luminosity output of the Sun (at all wavelengths). ULXs are so bright, they can be seen millions of light-years away, in other galaxies.

SS 433 appears to be about 1,000 times dimmer than the minimum threshold to be considered a ULX. This faintness is likely a trick of perspective: The high-energy X-rays from SS 433 are initially confined within two cones of gas extending outward from opposite sides of the central object. These cones are similar to a mirrored bowl that surrounds a flashlight bulb: They corral the X-ray light from SS 433 into a narrow beam, until it escapes and is detected by NuSTAR. But because the cones are not pointing directly at Earth, NuSTAR can't see the object's full brightness.

Figure 1 illustrates how SS 433 tilts back and forth in its orbit. Its brightness appears to change as it tilts toward and away from Earth. As with a flashlight, SS 433 appears much dimmer when it is viewed from the side.