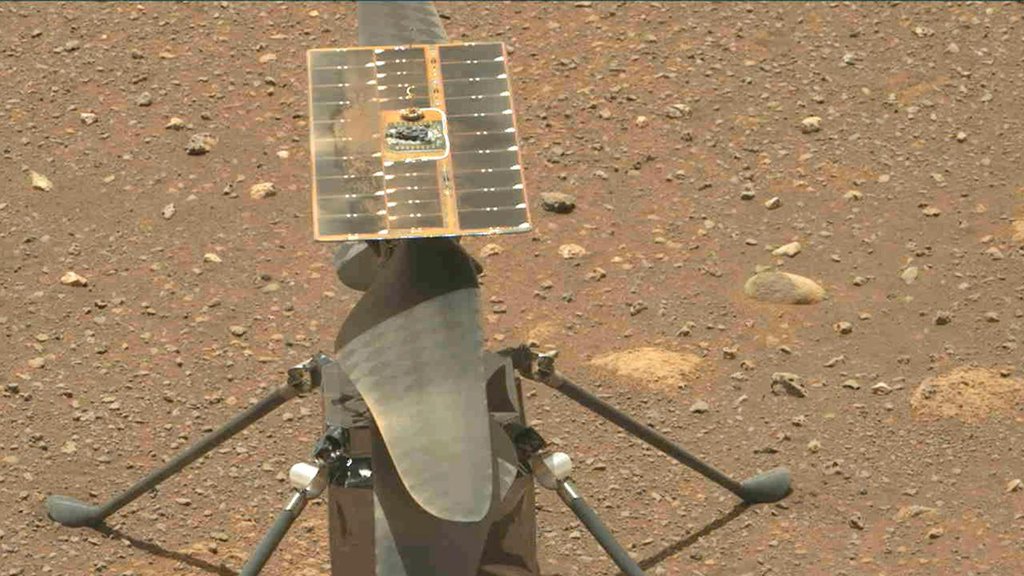 The Ingenuity Mars Helicopter's carbon fiber blades can be seen in this video taken by the Mastcam-Z instrument aboard NASA's Perseverance Mars rover on April 8, 2021, the 48th Martian day, or sol, of the mission. The four blades are arranged into two 4-foot-long (1.2-meter-long) counter-rotating rotors that can spin at roughly 2,400 rpm. The video shows the blades performing a wiggle test before the actual spin-up to ensure they were working properly.

The helicopter weighs about 4 pounds (1.8 kilograms) on Earth, and about 1.5 pounds (0.68 kilograms) on Mars. It stands 1.6 feet (0.49 meters) high. It's four specially made carbon fiber blades are arranged into two 4-foot-long (1.2-meter-long) counter-rotating rotors that spin at roughly 2,400 rpm. The helicopter's fuselage is 5.4 inches by 7.7 inches by 6.4 inches (13.6 centimeters by 19.5 centimeters by 16.3 centimeters); it has four carbon composite landing legs, each 1.26 feet (0.384 meters) long, giving the helicopter about 5 inches (13 centimeters) of clearance above the ground. It is powered by a solar array on top of the rotor system, which charges six lithium-ion batteries

NASA's Jet Propulsion Laboratory, which is managed for NASA by Caltech in Pasadena, California, built and manages operations of the Perseverance rover. The Mastcam-Z investigation is led and operated by Arizona State University in Tempe, working in collaboration with Malin Space Science Systems in San Diego, California on the design, fabrication, testing, and operation of the cameras.