Mastcam-Z Looks at Its Calibration Target 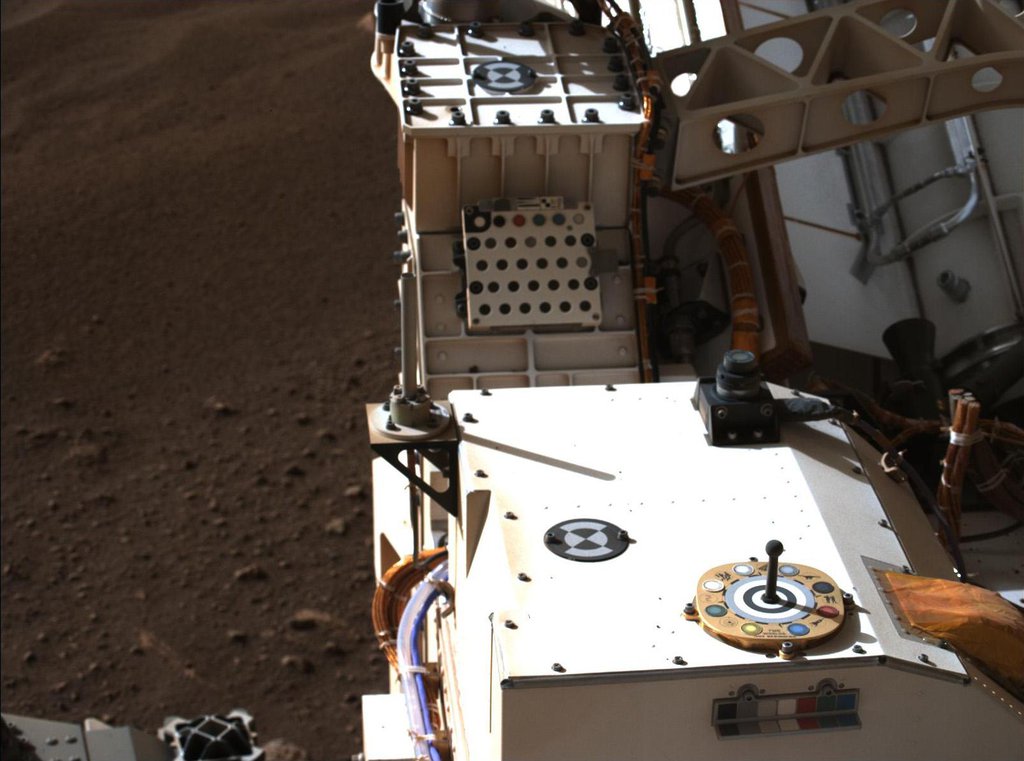 Mastcam-Z, a pair of zoomable cameras aboard NASA's Perseverance rover, imaged its calibration target for the first time on Feb. 20, 2021, the second Martian day, or sol, of Perseverance's mission. Visible in this natural-color composite are the Mastcam-Z primary-color and grayscale calibration target (the colorful circular object at right foreground) as well as the camera's secondary calibration target (the small colorful L-bracket just below the primary target). The Mastcam-Z team uses these targets to calibrate images of the Martian terrain to adjust for changes in brightness and dust in the atmosphere throughout the day.

The white square plate containing a grid of circular colored disks mounted farther to the aft on the rover is the calibration target for the SuperCam instrument. To the left of the image, the dusty and rocky Martian surface is visible at the Perseverance rover's landing site in Jezero crater. For more details about the Mastcam-Z calibration targets, see the article "Mars in Full Color" on the Mastcam-Z public web site, at https://mastcamz.asu.edu/mars-in-full-color.

Subsequent missions by NASA in cooperation with ESA (European Space Agency) would send spacecraft to Mars to collect these cached samples from the surface and return them to Earth for in-depth analysis.

The Mastcam-Z investigation is led and operated by Arizona State University in Tempe, working in collaboration with Malin Space Science Systems in San Diego, California on the design, fabrication, testing, and operation of the cameras, and in collaboration with the Neils Bohr Institute of the University of Copenhagen on the design, fabrication, and testing of the calibration targets.