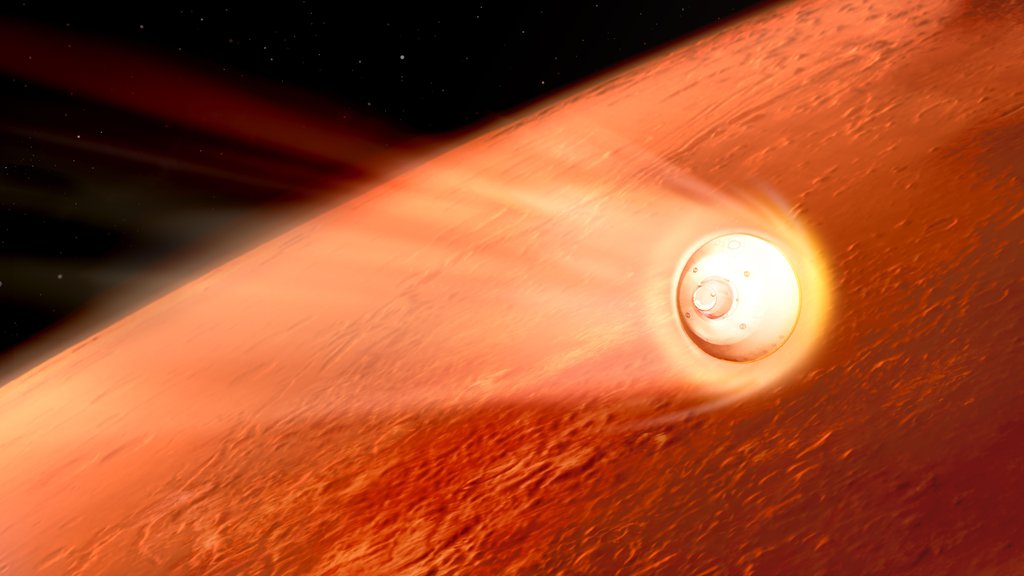 In this illustration of its descent to Mars, the spacecraft containing NASA's Perseverance rover slows down using the drag generated by its motion in the Martian atmosphere. Hundreds of critical events must execute perfectly and exactly on time for the rover to land on Mars safely on Feb. 18, 2021.

Entry, Descent, and Landing, or "EDL," begins when the spacecraft reaches the top of the Martian atmosphere, traveling nearly 12,500 mph (20,000 kph).

The cruise stage separates about 10 minutes before entering into the atmosphere, leaving the aeroshell, which encloses the rover and descent stage, to make the trip to the surface. The vehicle fires small thrusters on the backshell to reorient itself and make sure the heat shield is facing forward as it plunges into the atmosphere. As it descends through the atmosphere, the spacecraft fires these thrusters on its backshell to guide itself. The spacecraft uses the Martian atmosphere to brake, causing it to heat up dramatically. Peak heating occurs about 80 seconds after atmospheric entry, when the temperature at the external surface of the heat shield reaches about 2,370 degrees Fahrenheit (about 1,300 degrees Celsius). The rover is safe in the aeroshell, and reaches only about room temperature. Peak deceleration occurs about 10 seconds later (~90 seconds after atmospheric entry). The heat shield slows the spacecraft to under 1,000 mph (1,600 kph).