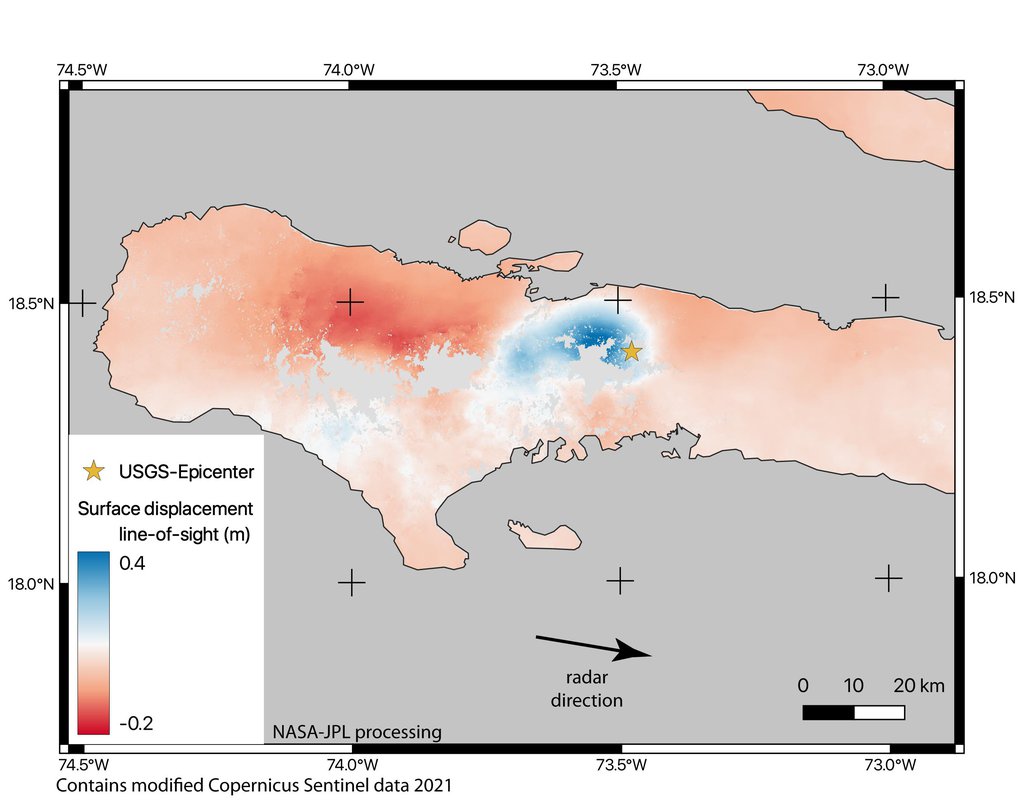 On August 14, 2021, a magnitude 7.2 earthquake struck western Haiti causing widespread damage and loss of life, and triggering landslides throughout the region.

Scientists with the Advanced Rapid Imaging and Analysis project (ARIA), a collaboration between NASA's Jet Propulsion Laboratory and the California Institute of Technology analyzed interferometric synthetic aperture radar images from the Copernicus Sentinel-1A satellite operated by the European Space Agency (ESA) to calculate a map of the deformation of Earth's surface caused by the quake.

Using images acquired before and after the earthquake – August 3 and 15, 2021, respectively – scientists produced this false-color map showing the amount of permanent surface movement the quake caused. Areas in blue moved toward the satellite by as much as 16 inches (50 centimeters) in a combination of up and eastward motion. These blue areas are close to the epicenter – marked with the orange star – indicating that there was likely a large slip on the fault beneath them. The areas to the west – shown with various shades of red – moved away from the satellite, mostly downward or westward, by as much as 8 inches (20 cm).

The two areas of significant ground movement (darker red and blue) are both west of the epicenter and indicate the fault rupture proceeded westward from its starting point. Areas with gray are open water or heavy vegetation that prevents the instrument from measuring change between satellite images. Scientists use these maps to build detailed models of the fault slip at depth and associated land movements to better understand the impact on future earthquake activity.

The Sentinel-1 data were provided by ESA. The image contains modified Copernicus 2021 data, processed by ESA and NASA/JPL. The NISAR (NASA-ISRO SAR) mission under development will acquire data similar to this wide-swath Sentinel-1 data when it is launched.