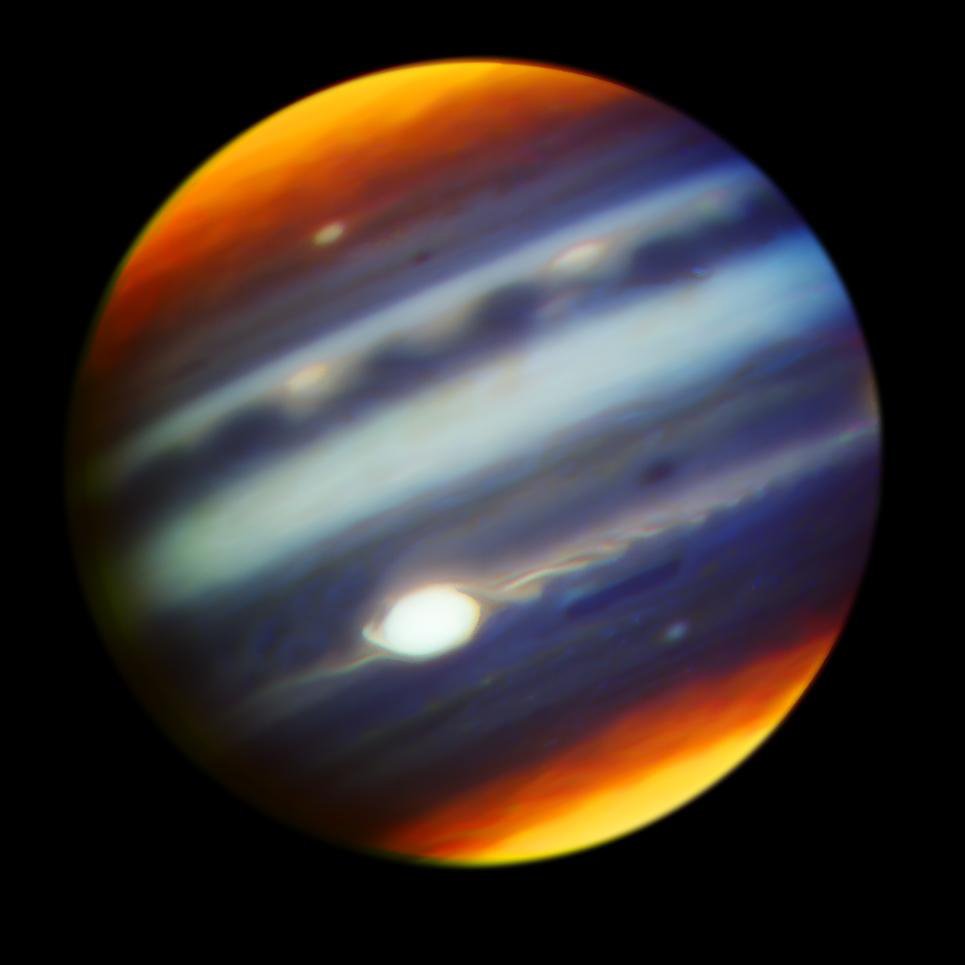 This composite, false-color infrared image of Jupiter reveals haze particles over a range of altitudes, as seen in reflected sunlight. It was taken using the Gemini North Telescope's Near-InfraRed Imager (NIRI) on May 18, 2017, in collaboration with the investigation of Jupiter by NASA's Juno mission. Juno completed its sixth close approach to Jupiter a few hours after this observation.

The multiple filters corresponding to each color used in the image cover wavelengths between 1.69 microns and 2.275 microns. Jupiter's Great Red Spot (GRS) appears as the brightest (white) region at these wavelengths, which are primarily sensitive to high-altitude clouds and hazes near and above the top of Jupiter's convective region.

The GRS is one of the highest-altitude features in Jupiter's atmosphere. Narrow spiral streaks that appear to lead into it or out of it from surrounding regions probably represent atmospheric features being stretched by the intense winds within the GRS, such as the hook-like structure on its western edge (left side). Some are being swept off its eastern edge (right side) and into an extensive wave-like flow pattern, and there is even a trace of flow from its northern edge.

Other features near the GRS include the dark block and dark oval to the south and the north of the eastern flow pattern, respectively, indicating a lower density of cloud and haze particles in those locations. Both are long-lived cyclonic circulations, rotating clockwise -- in the opposite direction as the counterclockwise rotation of the GRS.

A prominent wave pattern is evident north of the equator, along with two bright ovals, which are anticyclones that appeared in January 2017. Both the wave pattern and the ovals may be associated with an impressive upsurge in stormy activity that has been observed in these latitudes this year. Another bright anticyclonic oval is seen further north. The Juno spacecraft may pass over these ovals, as well as the Great Red Spot, during its close approach to Jupiter on July 10, 2017, Pacific Time (July 11, Universal Time).

The Gemini North Telescope is on Maunakea, Hawaii. The Gemini Observatory is a partnership of the United States, Canada, Brazil, Argentina and Chile.

An image of Jupiter taken the same night as this one, from a nearby telescope but at a longer infrared wavelength, is at PIA21714.