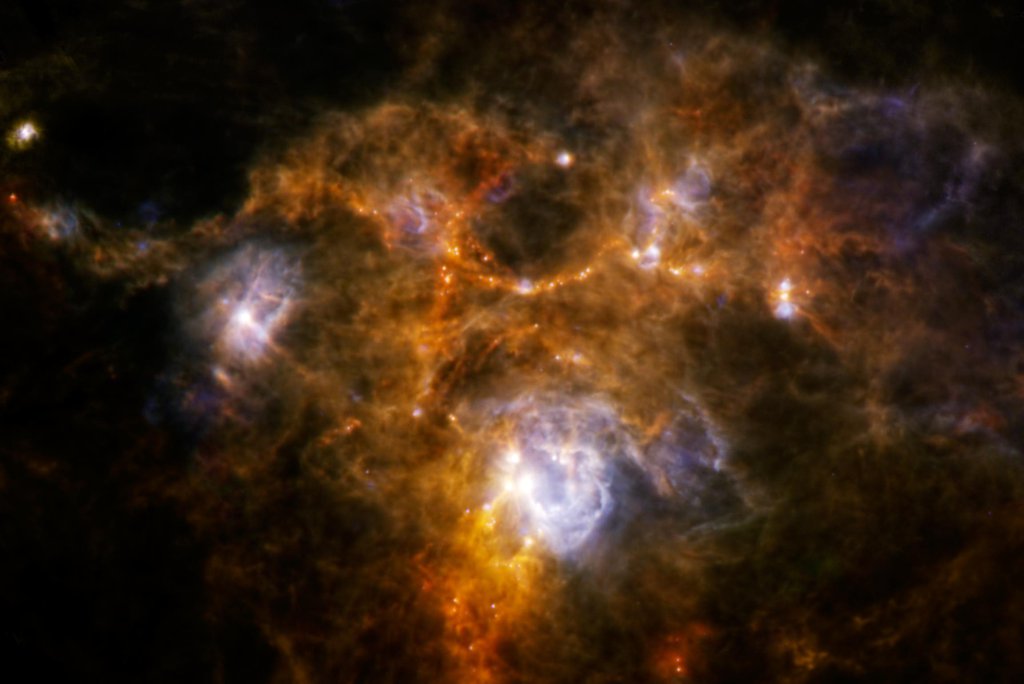 The Herschel Space Observatory has uncovered a weird ring of dusty material while obtaining one of the sharpest scans to date of a huge cloud of gas and dust, called NGC 7538. The gigantic ring structure is situated at the center-top of this image. The odd ovoid possesses the mass of 500 suns, with its long axis spanning about 35 light-years and its short axis about 25 light-years.

Astronomers often see ring and bubble-like structures in cosmic dust clouds. The strong winds cast out by the most massive stars, called O-type stars, can generate these expanding puffs, as can their explosive deaths as supernovas. But no energetic source or remnant of a deceased O-type star, such as a neutron star, is apparent within the center of the ring. It is possible that a big star blew the bubble and, because stars are all in motion, subsequently left the scene, escaping detection.

Astronomers study stellar nurseries such as NGC 7538 to better learn how stars come into being. The Herschel observations have revealed numerous clumps of material in NGC 7538, a baker's dozen of which may evolve into O-type stars. Early in the star-formation process, these clumps remain quite cold, just a few tens of degrees above absolute zero. At these temperatures, the clumps emit the bulk of their radiation in the low-energy, submillimeter and infrared light that Herschel was specifically designed to detect.

Finding the mysterious ring came as an unexpected bonus during the Herschel observing run.