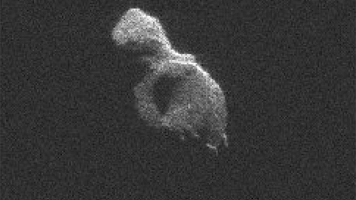 NASA scientists used Earth-based radar to produce these sharp views -- an image montage and a movie sequence -- of the asteroid designated "2014 HQ124" on June 8, 2014.

2014 HQ124 is what scientists call a "contact binary": an asteroid that consists of two lobes that are in contact and that could have once been separate objects. About one in six asteroids in the near-Earth population has this type of elongated, "peanut" shape.

The asteroid is about 1,300 feet (400 meters) long and about half as wide. The radar images reveal a wealth of interesting features, including a large depression or concavity on the larger lobe as well as two blocky, sharp-edged features at the bottom on the radar echo. Scientists suspect that some of the bright features that persist from frame to frame could be surface boulders.

The 21 radar images were taken over a span of four hours. During that interval, the asteroid rotated a few degrees per frame, suggesting its rotation period is slightly less than 24 hours.

The new views show features as small as about 12 feet (3.75 meters) wide. This is the highest resolution currently possible using scientific radar antennas to produce images. Such sharp views were made possible for this asteroid by linking together two giant radio telescopes to enhance their capabilities.

The first five images in the sequence -- the top row in the montage -- represent the data collected by Arecibo, and demonstrate that these data are 30 times brighter than what Goldstone can produce observing on its own. There is a gap of about 35 minutes between the first and second rows in the montage, or between the fifth and sixth frames in the video. The gap represents the time needed to switch from receiving at Arecibo to receiving at the smaller Goldstone station.

Each image in the montage and movie represents 10 minutes of data. Each frame has the same orientation, delay-Doppler dimensions and resolution (3.75 meters by 0.0125 Hertz).

The Jet Propulsion Laboratory manages the Near-Earth Object Program Office for NASA's Science Mission Directorate in Washington. JPL is a division of the California Institute of Technology in Pasadena.

More information about asteroids and near-Earth objects is available at http://neo.jpl.nasa.gov/ andhttp://www.jpl.nasa.gov/asteroidwatch.