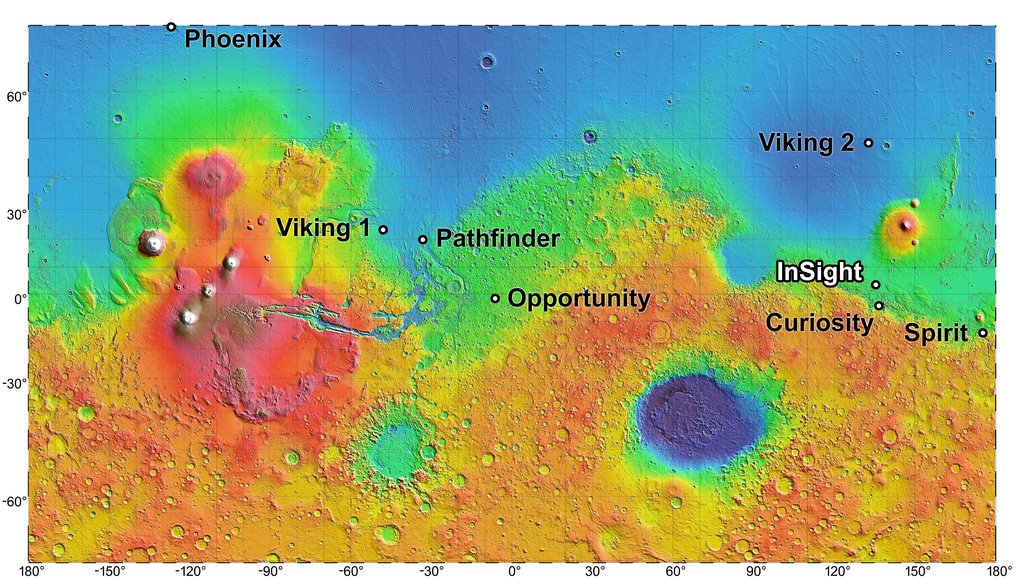 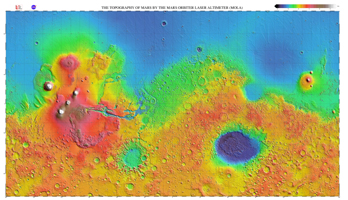 NASA's InSight mission will land in the Elysium Planitia region of Mars. InSight -- an acronym for Interior Exploration using Seismic Investigations, Geodesy and Heat Transport -- will study the deep interior of Mars to improve understanding of the processes that formed and shaped rocky planets, including Earth and its Moon.

The location of the landing site for InSight is indicated on this near-global topographic map of Mars, which also indicates landing sites of current and past NASA missions to the surface of Mars.

The location of Elysium Planitia close to the Martian equator meets an engineering requirement for the stationary InSight lander to receive adequate solar irradiation year-round on its photovoltaic array. The location also meets an engineering constraint for low elevation, optimizing the amount of atmosphere the spacecraft can use for deceleration during its descent to the surface.

The topographic map uses data from the Mars Orbiter Laser Altimeter on NASA's now inactive Mars Global Surveyor spacecraft. The color coding on this map indicates elevation relative to a reference datum, since Mars has no "sea level." The lowest elevations are presented as dark blue; the highest as white. The difference between green and orange in the color coding is about 2.5 miles (4 kilometers) vertically.

InSight will deploy a heat-flow probe designed to hammer itself 10 to 16 feet deep and monitor heat coming from the planet's interior. The mission will also use a seismometer and radio science.

For more information about InSight, visit: http://insight.jpl.nasa.gov. Additional information on the Discovery Program is available at: http://discovery.nasa.gov.