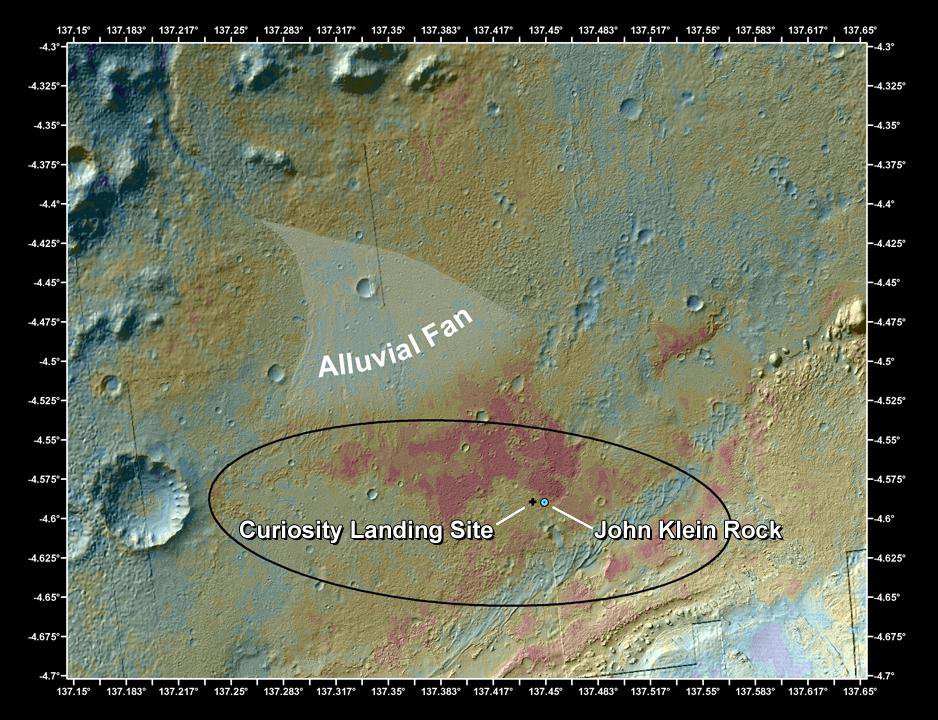 This false-color map shows the area within Gale Crater on Mars, where NASA's Curiosity rover landed on Aug. 5, 2012 PDT (Aug. 6, 2012 EDT) and the location where Curiosity collected its first drilled sample at the "John Klein" rock. The image merges topographic data with thermal inertia data that record the ability of the surface to hold onto heat. Red indicates a surface material that retains its heat longer into the evening than other areas, suggesting differences relative to its surroundings. Curiosity crossed the boundary from lower thermal inertia values to higher values on Sol 121 (the 121st Martian day of operations, which was Dec. 8, 2012, on Earth) while driving down into an area known as "Yellowknife Bay". The black oval indicates the targeted landing area for the rover, known as the "landing ellipse," and the black cross shows where the rover actually touched down at what has since been named the Bradbury Landing site. The blue circle indicates where the John Klein drill site is within the Yellowknife Bay area.

An alluvial fan, or fan-shaped deposit where debris spread out downslope, has been highlighted in lighter colors for better viewing. On Earth, alluvial fans often are formed by water flowing downslope. The John Klein outcrop is part of a geologic layer, known as "Sheepbed," which is a mudstone with abundant evidence for ancient aqueous processes. It seems likely that sediments were transported downhill from the eroding crater rim and became part of alluvial fan systems. The materials then flowed out where water and sediments accumulated to form a habitable environment represented by the Sheepbed mudstone.

This image was obtained by the Thermal Emission Imaging System on NASA's Odyssey orbiter.