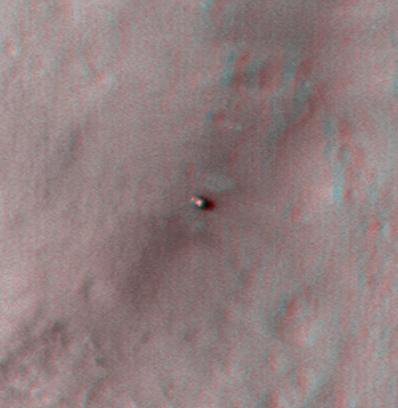 This 3D, or stereo anaglyph, view shows NASA's Mars rover Curiosity where it landed on Mars within Gale Crater, at a site now called Bradbury Landing. The view was produced from images taken by the High Resolution Imaging Science Experiment (HiRISE) on NASA's Mars Reconnaissance Orbiter as the satellite flew overhead after landing.

Viewing in 3D requires the traditional red-blue glasses, with red going over the left eye.

The image pairs have large stereo-convergence angles, which means that height differences in the terrain appear exaggerated; for example, the slopes look about ten times steeper than they really are. This exaggeration is useful over very flat terrain such as landing sites.

The full image set for these observations can be seen at: http://uahirise.org/releases/msl-3d.php.