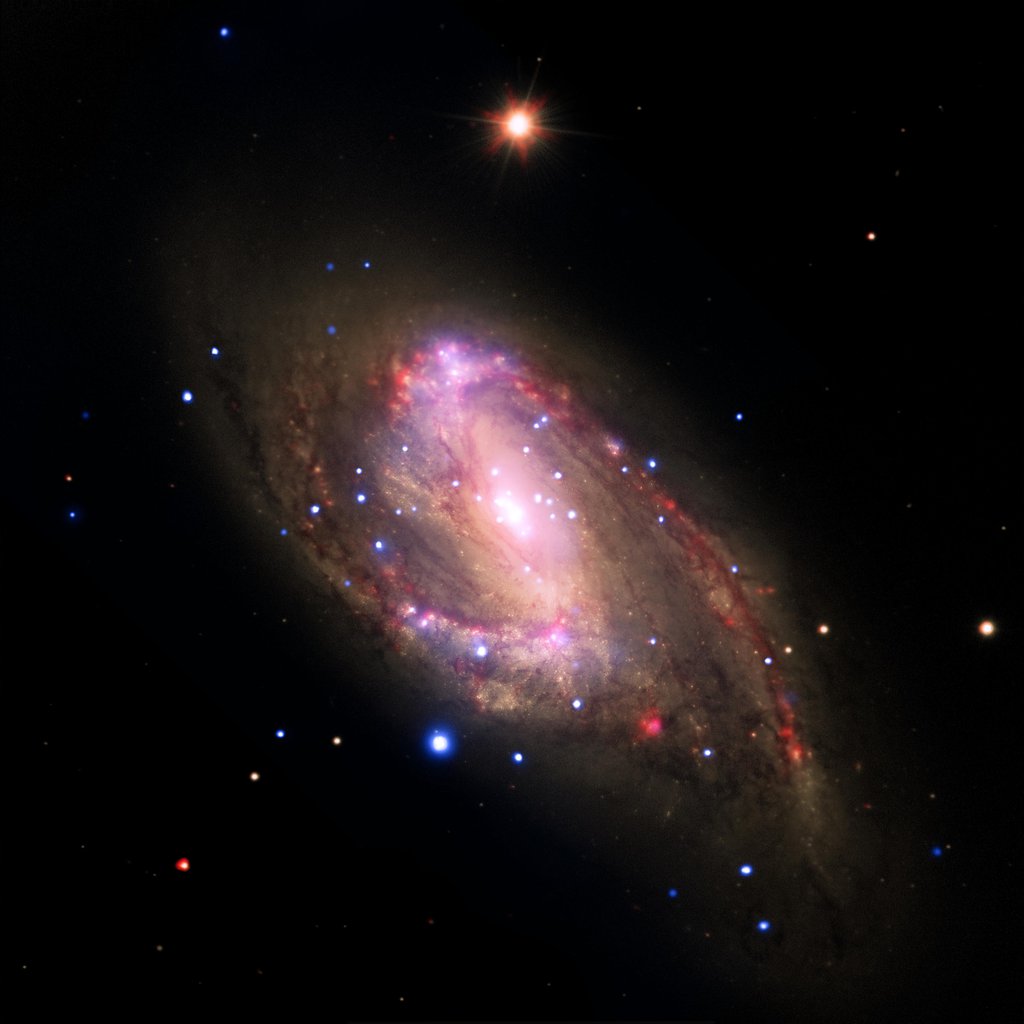 Click on individual image for larger view
The spiral galaxy NGC 3627 is located about 30 million light years from Earth. This composite image includes X-ray data from NASA's Chandra X-ray Observatory (blue), infrared data from the Spitzer Space Telescope (red), and optical data from the Hubble Space Telescope and the Very Large Telescope (yellow). The inset shows the central region, which contains a bright X-ray source that is likely powered by material falling onto a supermassive black hole.

A search using archival data from previous Chandra observations of a sample of 62 nearby galaxies has shown that 37 of the galaxies, including NGC 3627, contain X-ray sources in their centers. Most of these sources are likely powered by central supermassive black holes. The survey, which also used data from the Spitzer Infrared Nearby Galaxy Survey, found that seven of the 37 sources are new supermassive black hole candidates.

Confirming previous Chandra results, this study finds the fraction of galaxies found to be hosting supermassive black holes is much higher than found with optical searches. This shows the ability of X-ray observations to find black holes in galaxies where relatively low-level black hole activity has either been hidden by obscuring material or washed out by the bright optical light of the galaxy.

The combined X-ray and infrared data suggest that the nuclear activity in a galaxy is not necessarily related to the amount of star-formation in the galaxy, contrary to some early claims. In contrast, these new results suggest that the mass of the supermassive black hole and the rate at which the black hole accretes matter are both greater for galaxies with greater total masses.

A paper describing these results was published in the April 10, 2011 issue of The Astrophysical Journal. The authors are Catherine Grier and Smita Mathur of The Ohio State University in Columbus, OH; Himel GHosh of CNRS/CEA-Saclay in Guf-sur-Yvette, France and Laura Ferrarese from Herzberg Institute of Astrophysics in Victoria, Canada.