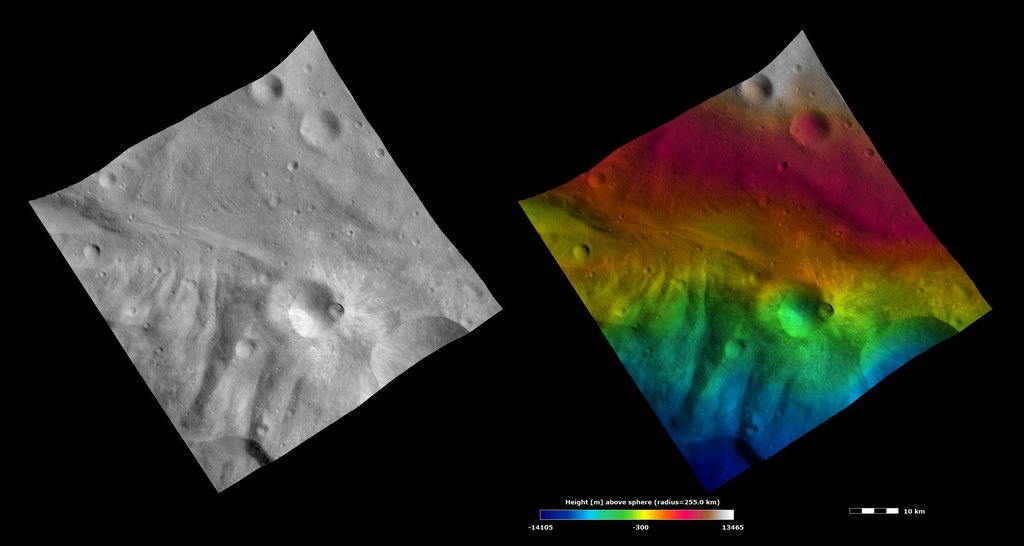 These Dawn FC (framing camera) images show Tuccia crater, after which Tuccia quadrangle is named. The left image is a brightness image, which is taken directly through the clear filter of the FC, and shows the brightness and darkness of the surface. The right image uses the same brightness image as its base but then a color-coded height representation of the topography is overlain onto it. The topography is calculated from a set of images that were observed from different viewing directions. The various colors correspond to the height of the area. The white and red areas in the top half of the image are the highest areas and the blue areas in the bottom of the image are the lowest areas. Tuccia crater is the crater about 8 kilometers (5 miles), offset to the right of the center of the images. It has a smaller, fresher impact crater located on its rim. Tuccia crater has distinctive bright ejecta rays emanating from it, which are clearly seen in the brightness image. Tuccia crater is located about 40 kilometers (25 miles) northward of the rim of Vesta's large south polar Rheasilvia basin. The hummocky (i.e., wavy or undulating) terrain of Vesta's Rheasilvia basin is visible in the bottom half of these images as roughly vertical ridges.

These images are located in Vesta's Tuccia quadrangle and the center of the image is 38.1 degrees south latitude, 194.3 degrees east longitude. NASA's Dawn spacecraft obtained this image with its framing camera on Oct. 15, 2011. This image was taken through the camera's clear filter. The distance to the surface of Vesta is 700 kilometers (435 miles) and the image has a resolution of about 70 meters (230 feet) per pixel. This image was acquired during the HAMO (high-altitude mapping orbit) phase of the mission. The images are lambert-azimuthal map projected.

The Dawn mission to Vesta and Ceres is managed by NASA's Jet Propulsion Laboratory, a division of the California Institute of Technology in Pasadena, for NASA's Science Mission Directorate, Washington. UCLA is responsible for overall Dawn mission science. The Dawn framing cameras have been developed and built under the leadership of the Max Planck Institute for Solar System Research, Katlenburg-Lindau, Germany, with significant contributions by DLR German Aerospace Center, Institute of Planetary Research, Berlin, and in coordination with the Institute of Computer and Communication Network Engineering, Braunschweig. The framing camera project is funded by the Max Planck Society, DLR, and NASA/JPL.