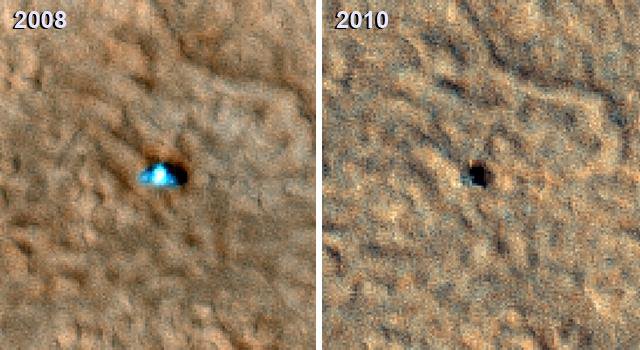 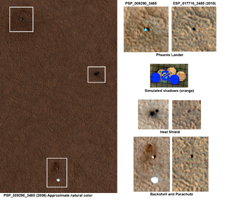 Figure 1
Click on the image for larger annotated version

The set of images in Figure 1 shows "before" and "after" images of NASA's Phoenix Mars Lander taken by the High Resolution Imaging Science Experiment (HiRISE) camera on NASA's Mars Reconnaissance Orbiter. Scientists are analyzing these images to better understand how the spacecraft may have endured its first Martian winter. The "before" image was taken on July 20, 2008 and the "after" image was taken on May 7, 2010. The new image of the Phoenix landing site is a close match to the season and illumination and viewing angles of some of the first HiRISE images acquired after the successful landing on May 25, 2008.

In the top right set of smaller "before Martian winter" and "after Martian winter" images of the lander, the 2008 lander image shows a very bright spot (from reflections) with relatively blue spots on either side corresponding to the clean circular solar panels. The shadows in that image consist of three overlapping dark circles, as shown by the schematic simulated image below the close-up lander images. In the 2010 image, where the illumination and viewing angles are within 1 degree of the 2008 image, scientists see a dark shadow that could be the lander body and eastern solar panel, but no shadow from the western solar panel. Because the reflection is no longer present on the dusty lander, the 2010 image should provide a better view of the shadow from the western array, but that shadow is absent.

Phoenix landed at 68 degrees north latitude, an area where the atmosphere and surface get so cold in winter that carbon dioxide forms a frost on the surface as much as several decimeters (one or more feet) thick. This frost, also known as dry ice, blankets the entire northern landscape each Martian winter, including any spacecraft that might be on the surface. The solar arrays on Phoenix were not designed to withstand significant loads of carbon dioxide frost, so scientists believe the western panel has collapsed.