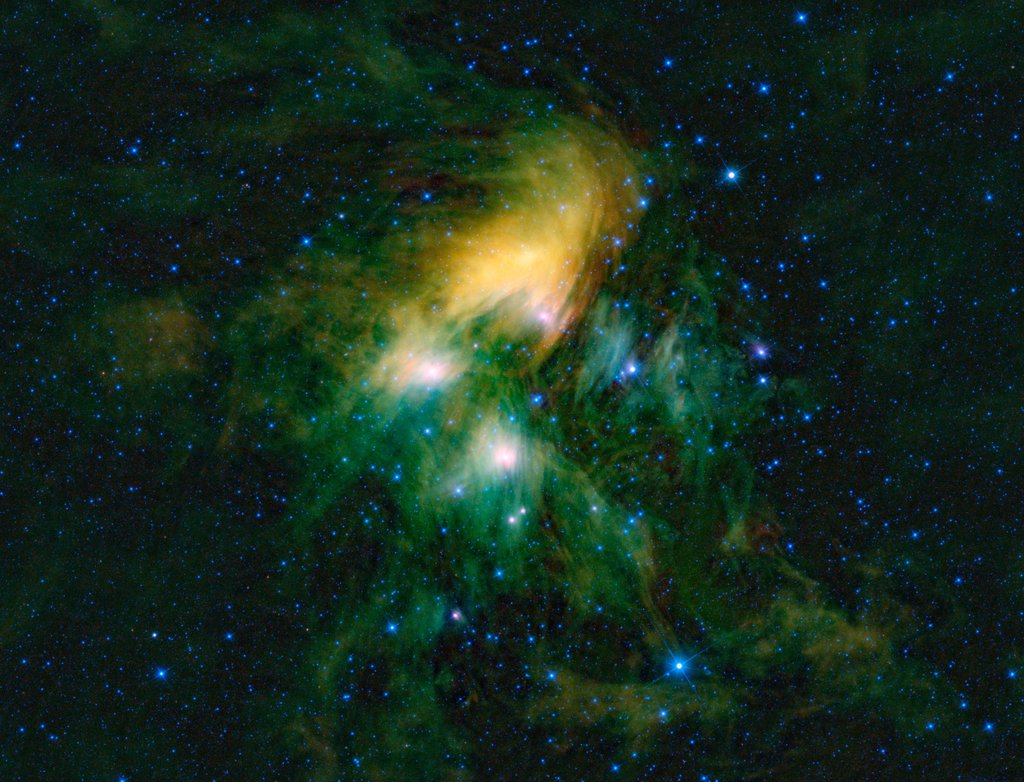 This image shows the famous Pleiades cluster of stars as seen through the eyes of WISE, or NASA's Wide-field Infrared Survey Explorer. The mosaic contains a few hundred image frames -- just a fraction of the more than one million WISE has captured so far as it completes its first survey of the entire sky in infrared light.

The Pleiades are what astronomers call an open cluster of stars, meaning the stars are loosely bound to each other and will eventually, after a few hundred million years, go their separate ways. The cluster is prominent in the sky during winter months in the constellation Taurus, when viewed from the Northern Hemisphere. Often called the Seven Sisters from Greek tradition, this cluster of stars has been named by cultures the world over: Parveen in Persian; Tianquiztli in the Aztec tradition, and Subaru in Japan. The Pleiades is even the logo of the automotive company that bears its Japanese name.

In this infrared view of the Pleiades from WISE, the cluster is seen surrounded by an immense cloud of dust. When this cloud was first observed, it was thought to be leftover material from the formation of the cluster. However, studies have found the cluster to be about 100 million years old -- any dust left over from its formation would have long dissipated by this time, from radiation and winds from the most massive stars. The cluster is therefore probably just passing through the cloud seen here, heating it up and making it glow.

At a distance of about 436 light-years from Earth, the Pleiades is one of the closest star clusters and plays an important role in determining distances to astronomical bodies further away. This picture from WISE covers an area of 3.05 by 2.33 degrees, which is the roughly the same area on the sky that a grid of six full moons by 4.7 full moons would occupy. Most of the stars in the cluster fall within the 20-light-year-wide region shown here.