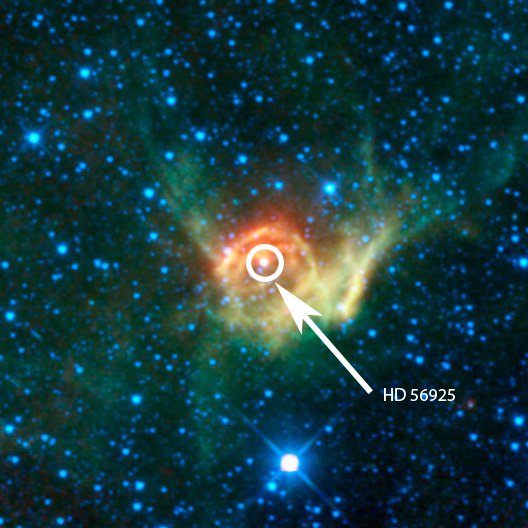 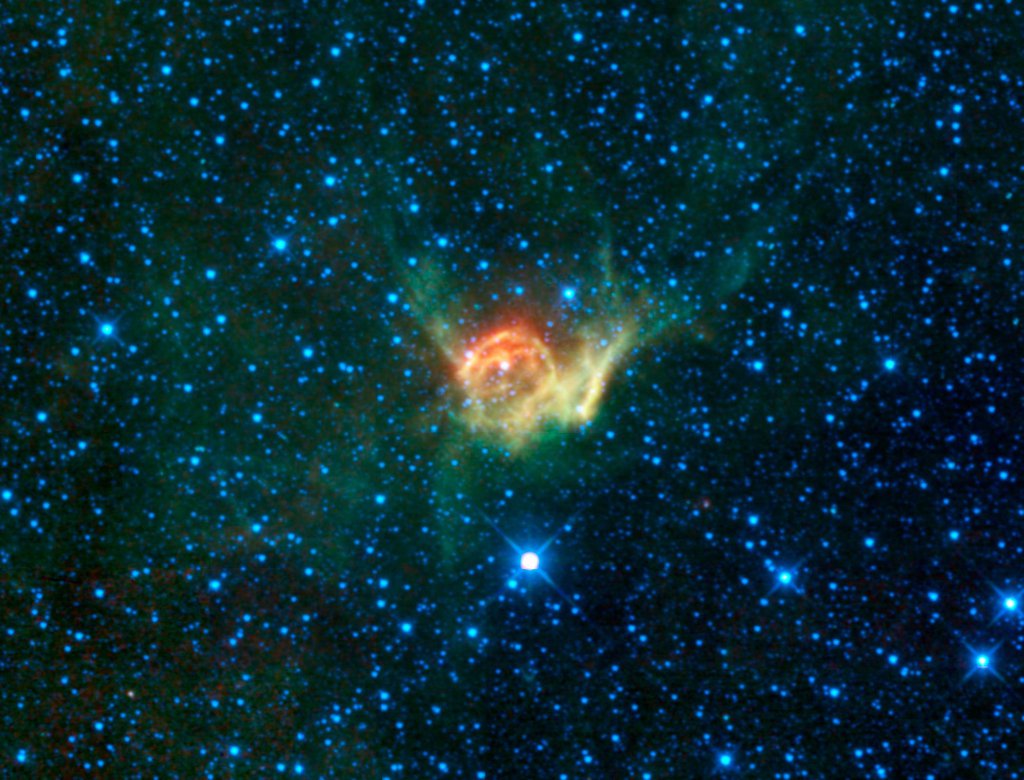 This heroic image from WISE is of a special cloud of dust and gas in the constellation Canis Major catalogued as NGC 2359. The nebula is more commonly known as Thor's Helmet due to its remarkable resemblance to depictions of the headwear donned by the famed Norse god of thunder and lightning.

Powering Thor's Helmet is HD 56925, a highly luminous "Wolf-Rayet" star (seen at the center of the helmet). These kinds of stars are massive; from 10 to 80 times the mass of our Sun. Such stars are often associated with bright nebulae, many of which appear to be spherical bubbles with the Wolf-Rayet star at the center. It is thought that the progenitors of these stars are either red supergiants or luminous blue variable stars, both of which slowly shed matter as they age. Once the star enters its Wolf-Rayet phase its strong, fast stellar wind sweeps up the surrounding debris left by the original star and even gathers up interstellar matter from its environment. It literally blows a bubble in space. These hot stars become 200,000 times more luminous than the Sun. They flood the nebula with ultraviolet light that ionizes much of the gaseous material leading to the bright emission in visible light. Interactions with a nearby large molecular cloud are thought to have contributed to the more complex shape and curved bow-shock structure of Thor's Helmet.

NGC 2359 was the first Wolf-Rayet nebula to be discovered. Between 1917 and 1919, Francis Pease studied the nebula at the Mt. Wilson observatory in southern California. He described the bright regions of the nebula as matching the descriptions of early observers such as Sir John Herschel (son of the discoverer of infrared light, William Herschel), who saw a bust rather than a helmet. The object was later found to show nitrogen emission by Edwin Hubble and listed in his 1922 paper, "A general study of diffuse galactic nebulae." The object has also been of interest to members of the WISE science team during their careers having been studied by Martin Cohen and the WISE Principal Investigator Ned Wright, who co-authored an article in the March 1980 issue of Sky & Telescope, "A bubble in space - The shell of NGC 2359."

Thor's Helmet is about 30 light-years across and its distance from Earth is estimated to be about 15,000 light-years. This image covers an area of sky about 2.5 times the size of the full Moon. All four infrared detectors aboard WISE were used to make this image. Color is representational: blue and cyan represent infrared light at wavelengths of 3.4 and 4.6 microns, which is dominated by light from stars. Green and red represent light at 12 and 22 microns, which is mostly light from warm dust.