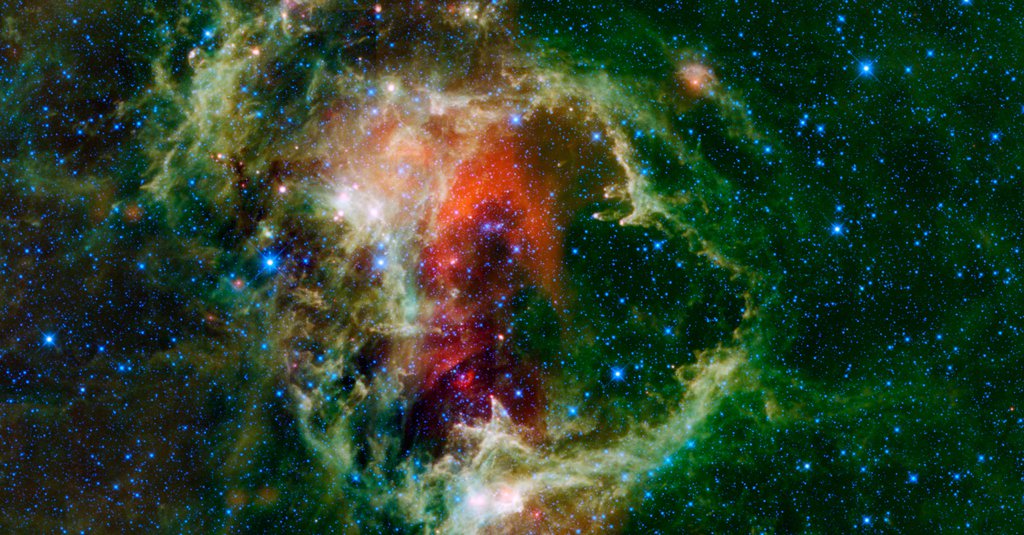 This WISE mosaic is of the Soul Nebula (a.k.a. the Embryo Nebula, IC 1848, or W5). It is an open cluster of stars surrounded by a cloud of dust and gas over 150 light-years across and located about 6,500 light-years from Earth in the constellation Cassiopeia, near the Heart Nebula (partially seen in the WISE image of Maffei 1 & 2).

The cluster of stars, IC 1848, formed about a million years ago from the material of the nebula. Winds and ultraviolet light from these young stars are excavating a cavity in the cloud. Parts of the cloud that are more dense than their surroundings are being eroded more slowly and form giant towers, or pillars of dust and gas, which all point toward the central star cluster. It's reminiscent of the landscape of Badlands National Park in South Dakota. Material at the interior edges of the cavity is also being compressed by the winds and radiation from the star cluster. This triggers new star formation in those areas. The pillars inside the Soul Nebula are each about 10 light-years tall and have stars forming at their tips.

A note about astronomical names: Many objects in the sky have common names that astronomers will use to reference them. However, many, many more objects in the sky do not have common names and only their entry name in an astronomical catalogue is used. One of the most prominent astronomical catalogues is the New General Catalogue (NGC) of Nebulae and Clusters of Stars. It was published in the 1880s. So an object with a name like NGC 7380 means that it is the 7,380th entry in the NGC. Two additional catalogues were published as addendums to the NGC called the Index Catalogues (IC) between 1896 and 1905. The designation of IC 1848 for the Soul Nebula means that it is the 1,848th entry in the Index Catalogues of the NGC. There are many catalogues of astronomical objects, each with their own purpose, and objects can be listed in more than one catalogue. For example, Dutch Astronomer Gart Westerhout made a catalogue of radio sources in the sky. Entry number five in the catalogue, W5, corresponds to IC 1848, i.e., the Soul Nebula (sometimes called the Embryo Nebula).