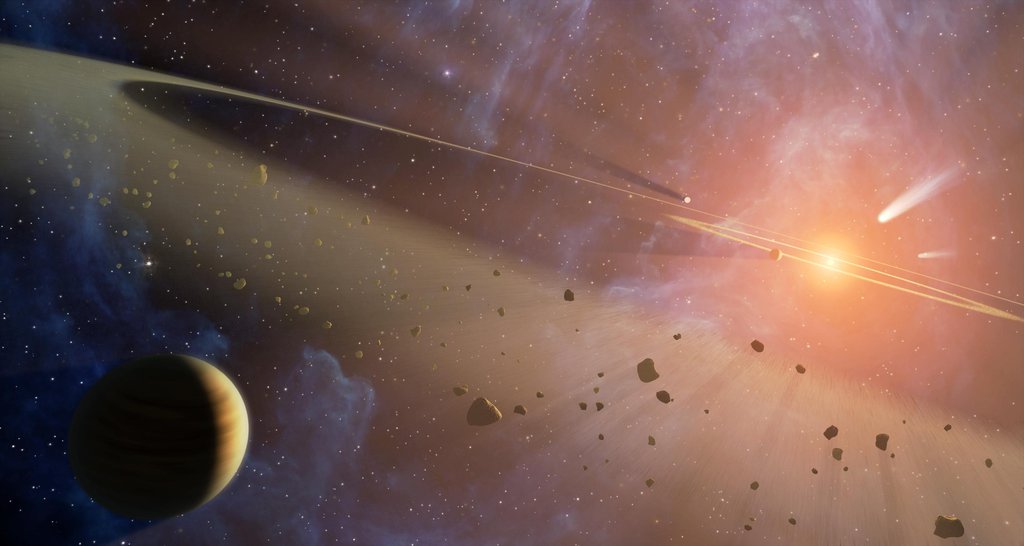 Epsilon Eridani is located about 10 light-years away in the constellation Eridanus. It is visible in the night skies with the naked eye.

The system's inner asteroid belt appears as the yellowish ring around the star, while the outer asteroid belt is in the foreground. The outermost comet ring is too far out to be seen in this view, but comets originating from it are shown in the upper right corner.

Astronomers think that each of Epsilon Eridani's asteroid belts could have a planet orbiting just outside it, shepherding its rocky debris into a ring in the same way that Jupiter helps keep our asteroid belt confined. The planet near the inner belt was previously identified in 2000 via the radial velocity, or "star wobble," technique, while the planet near the outer belt was inferred when Spitzer discovered the belt.

Because the star is so close and similar to the sun, it is a popular locale in science fiction. it has been featured in novels by Issac Asimov and Frank Herbert, among others. In the popular TV series "Babylon 5" it is the location of the featured space station; as a nod to the show, hidden within the background nebula in this artist concept is a small silhouette that may be familiar to fans of the series. Can you find it?