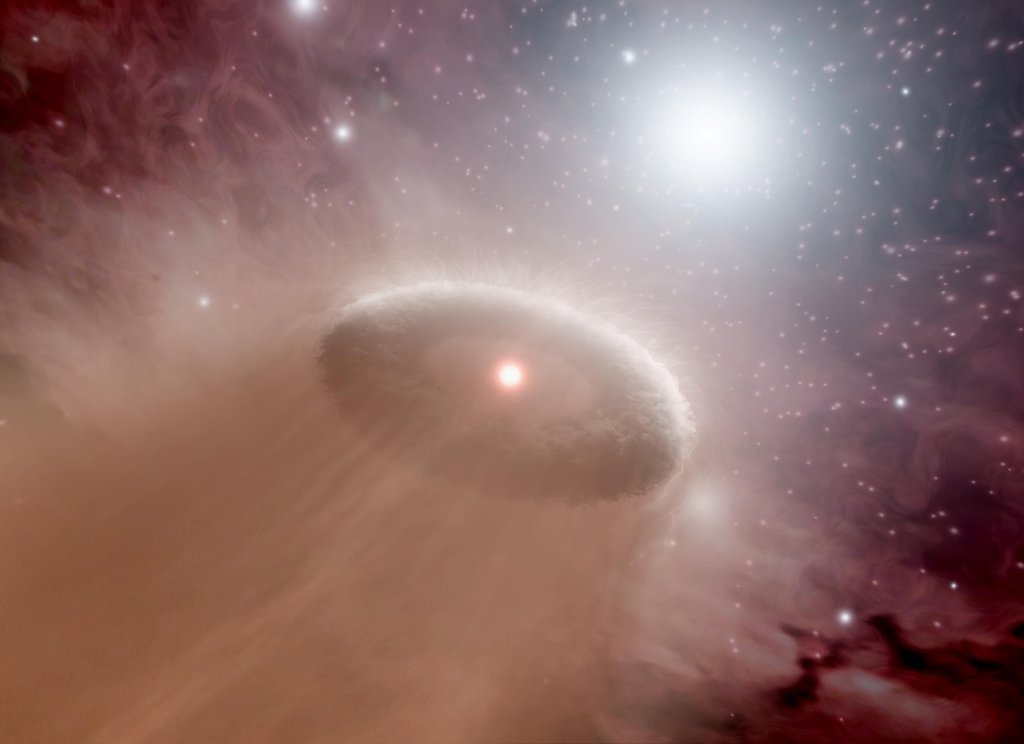 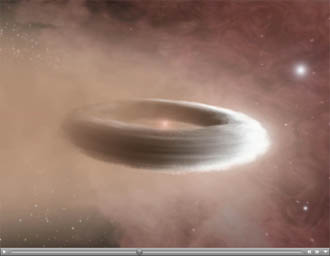 Click on the image for full resolution animation
(Half Resolution)

"The further on the edge, the hotter the intensity," sings Kenny Loggins in "Danger Zone," a song made famous by the movie "Top Gun." The same words ring true for young, cooler stars like our sun that live in the danger zones around scorching hot stars, called O-stars. The closer a young, maverick star happens to be to a super hot O-star, the more likely its burgeoning planets will be blasted into space.

This artist's animation illustrates how this process works. The movie begins by showing an O-star in a murky star-forming region. It then pans out to show a young, cooler star and its swirling disk of planet-forming material. Disks like this one, called protoplanetary disks, are where planets are born. Gas and dust in a disk clumps together into tiny balls that sweep through the material, growing in size to eventually become full-grown planets.

The young star happens to lie within the "danger zone" around the O-star, which means that it is too close to the hot star to keep its disk. Radiation and winds from the O-star boil and blow away the material, respectively. This process, called photoevaporation, is sped up here but takes anywhere from 100,000 to about 1,000,000 years. Without a disk, the young star will not be able to produce planets.

Our own sun and its suite of planets might have grown up on the edge of an O-star's danger zone before migrating to its current, spacious home. However, we know that our young sun didn't linger for too long in any hazardous territory, or our planets, and life, wouldn't be here today.

NASA's Spitzer Space Telescope surveyed the danger zones around five O-stars in the Rosette nebula. It was able to determine that the zones are spheres with a radius of approximately 1.6 light-years, or 10 trillion miles.