A Moment Frozen in Time 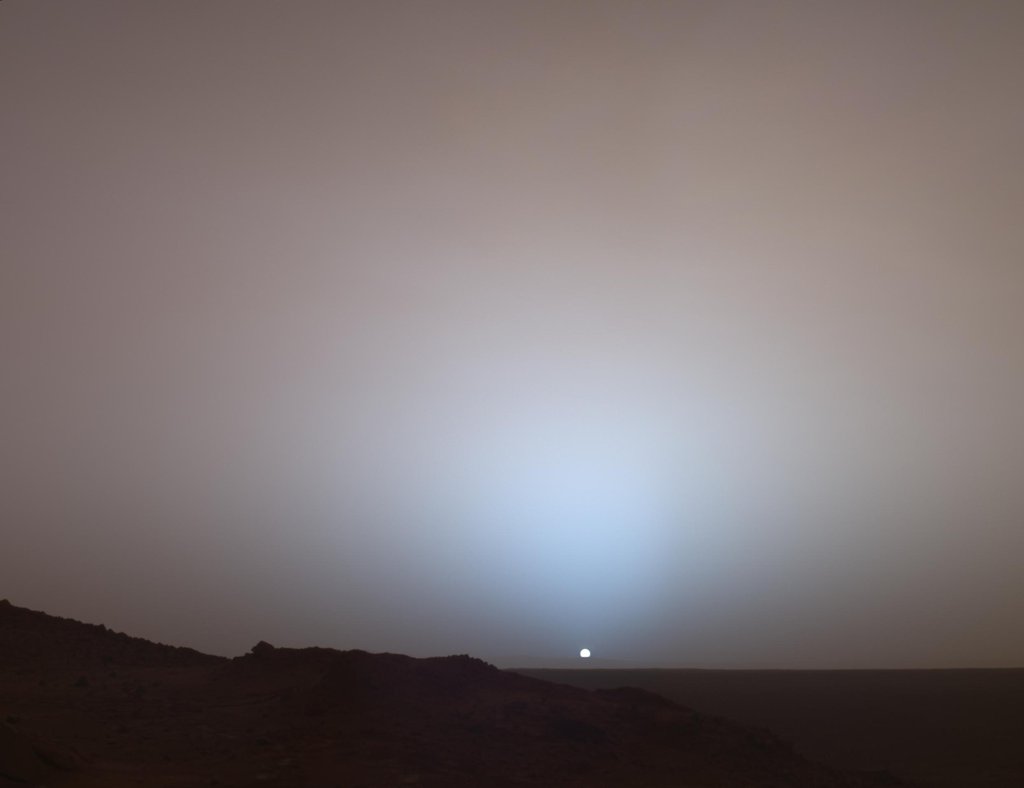 On May 19th, 2005, NASA's Mars Exploration Rover Spirit captured this stunning view as the Sun sank below the rim of Gusev crater on Mars. This Panoramic Camera (Pancam) mosaic was taken around 6:07 in the evening of the rover's 489th martian day, or sol. Spirit was commanded to stay awake briefly after sending that sol's data to the Mars Odyssey orbiter just before sunset. This small panorama of the western sky was obtained using Pancam's 750-nanometer, 530-nanometer and 430-nanometer color filters. This filter combination allows false color images to be generated that are similar to what a human would see, but with the colors slightly exaggerated. In this image, the bluish glow in the sky above the Sun would be visible to us if we were there, but an artifact of the Pancam's infrared imaging capabilities is that with this filter combination the redness of the sky farther from the sunset is exaggerated compared to the daytime colors of the martian sky. Because Mars is farther from the Sun than the Earth is, the Sun appears only about two-thirds the size that it appears in a sunset seen from the Earth. The terrain in the foreground is the rock outcrop "Jibsheet," a feature that Spirit has been investigating for several weeks (rover tracks are dimly visible leading up to "Jibsheet"). The floor of Gusev crater is visible in the distance, and the Sun is setting behind the wall of Gusev some 80 km (50 miles) in the distance.

This mosaic is yet another example from MER of a beautiful, sublime martian scene that also captures some important scientific information. Specifically, sunset and twilight images are occasionally acquired by the science team to determine how high into the atmosphere the martian dust extends, and to look for dust or ice clouds. Other images have shown that the twilight glow remains visible, but increasingly fainter, for up to two hours before sunrise or after sunset. The long martian twilight (compared to Earth's) is caused by sunlight scattered around to the night side of the planet by abundant high altitude dust. Similar long twilights or extra-colorful sunrises and sunsets sometimes occur on Earth when tiny dust grains that are erupted from powerful volcanoes scatter light high in the atmosphere.