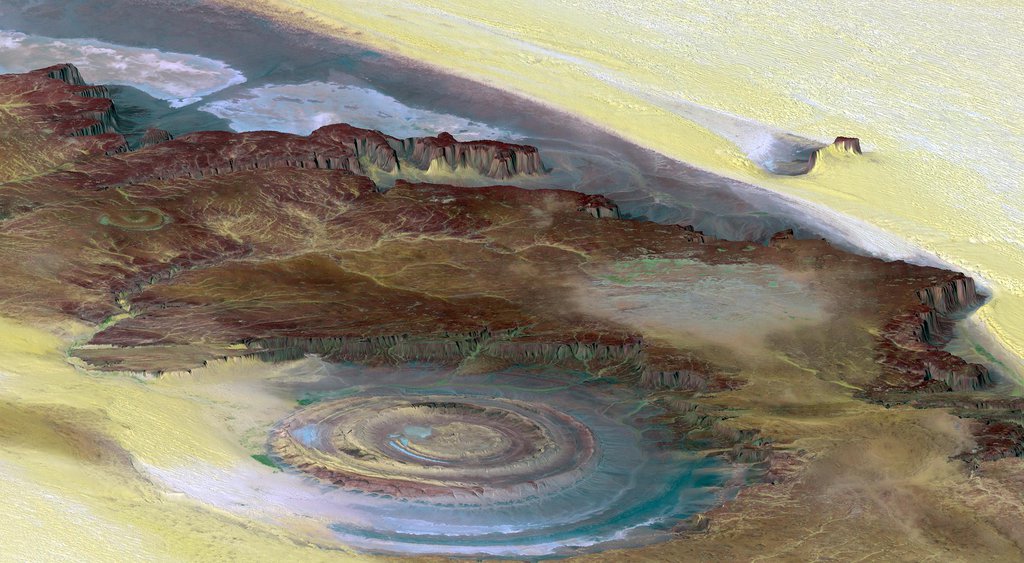 This prominent circular feature, known as the Richat Structure, in the Sahara desert of Mauritania is often noted by astronauts because it forms a conspicuous 50-kilometer-wide (30-mile-wide) bull's-eye on the otherwise rather featureless expanse of the desert. Initially mistaken for a possible impact crater, it is now known to be an eroded circular anticline (structural dome) of layered sedimentary rocks.

Extensive sand dunes occur in this region and the interaction of bedrock topography, wind, and moving sand is evident in this scene. Note especially how the dune field ends abruptly short of the cliffs at the far right as wind from the northeast (lower right) apparently funnels around the cliff point, sweeping clean areas near the base of the cliff. Note also the small isolated peak within the dune field. That peak captures some sand on its windward side, but mostly deflects the wind and sand around its sides, creating a sand-barren streak that continues far downwind.

This view was generated from a Landsat satellite image draped over an elevation model produced by the Shuttle Radar Topography Mission (SRTM). The view uses a 6-times vertical exaggeration to greatly enhance topographic expression. For vertical scale, note that the height of the mesa ridge in the back center of the view is about 285 meters (about 935 feet) tall. Colors of the scene were enhanced by use of a combination of visible and infrared bands, which helps to differentiate bedrock (browns), sand (yellow, some white), minor vegetation in drainage channels (green), and salty sediments (bluish whites). Some shading of the elevation model was included to further highlight the topographic features.