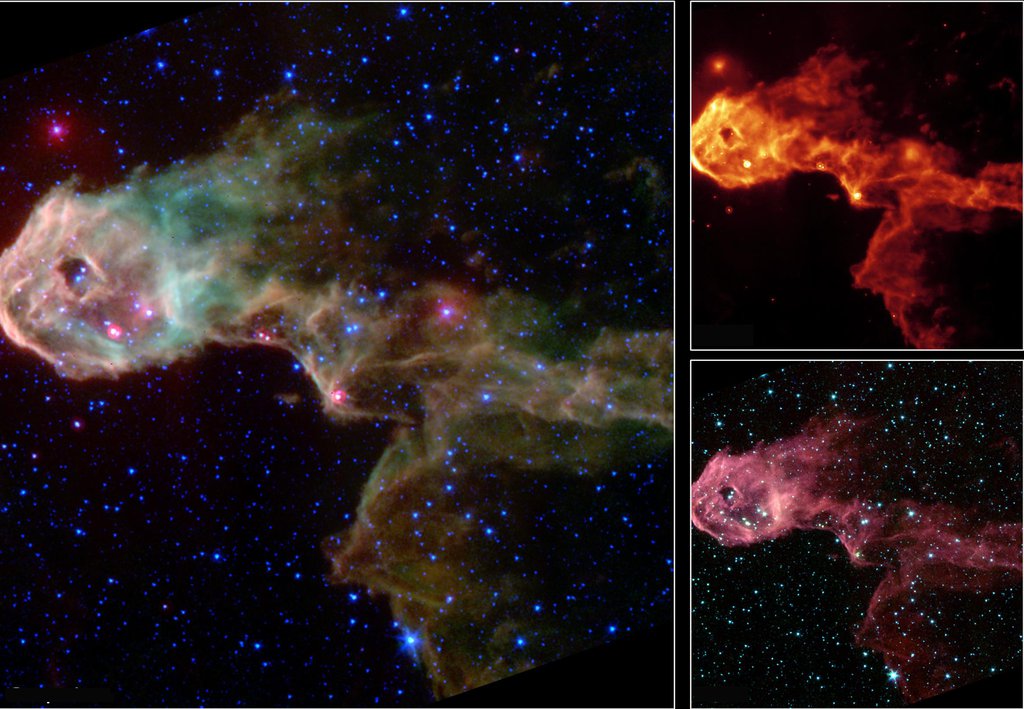 CompositeMIPSIRACClick on an individual image for larger view

NASA's Spitzer Space Telescope has captured a glowing stellar nursery within a dark globule that is opaque at visible light. These new images pierce through the obscuration to reveal the birth of new protostars, or embryonic stars, and young stars never before seen.

The Elephant's Trunk Nebula is an elongated dark globule within the emission nebula IC 1396 in the constellation of Cepheus. Located at a distance of 2,450 light-years, the globule is a condensation of dense gas that is barely surviving the strong ionizing radiation from a nearby massive star. The globule is being compressed by the surrounding ionized gas.

The large composite image above is a product of combining data from the observatory's multiband imaging photometer and the infrared array camera. The thermal emission at 24 microns measured by the photometer (red) is combined with near-infrared emission from the camera at 3.6/4.5 microns (blue) and from 5.8/8.0 microns (green). The colors of the diffuse emission and filaments vary, and are a combination of molecular hydrogen (which tends to be green) and polycyclic aromatic hydrocarbon (brown) emissions.

Within the globule, a half dozen newly discovered protostars, or embryonic stars, are easily discernible as the bright red-tinted objects, mostly along the southern rim of the globule. These were previously undetected at visible wavelengths due to obscuration by the thick cloud ('globule body') and by dust surrounding the newly forming stars. The newborn stars form in the dense gas because of compression by the wind and radiation from a nearby massive star (located outside the field of view to the left). The winds from this unseen star are also responsible for producing the spectacular filamentary appearance of the globule itself.

The Spitzer Space Telescope also sees many newly discovered young stars, often enshrouded in dust, which may be starting the nuclear fusion that defines a star. These young stars are too cool to be seen at visible wavelengths. Both the protostars and young stars are bright in the mid-infrared because of their surrounding discs of solid material. A few of the visible-light stars in this image were found to have excess infrared emission, suggesting they are more mature stars surrounded by primordial remnants from their formation, or from crumbling asteroids and comets in their planetary systems.