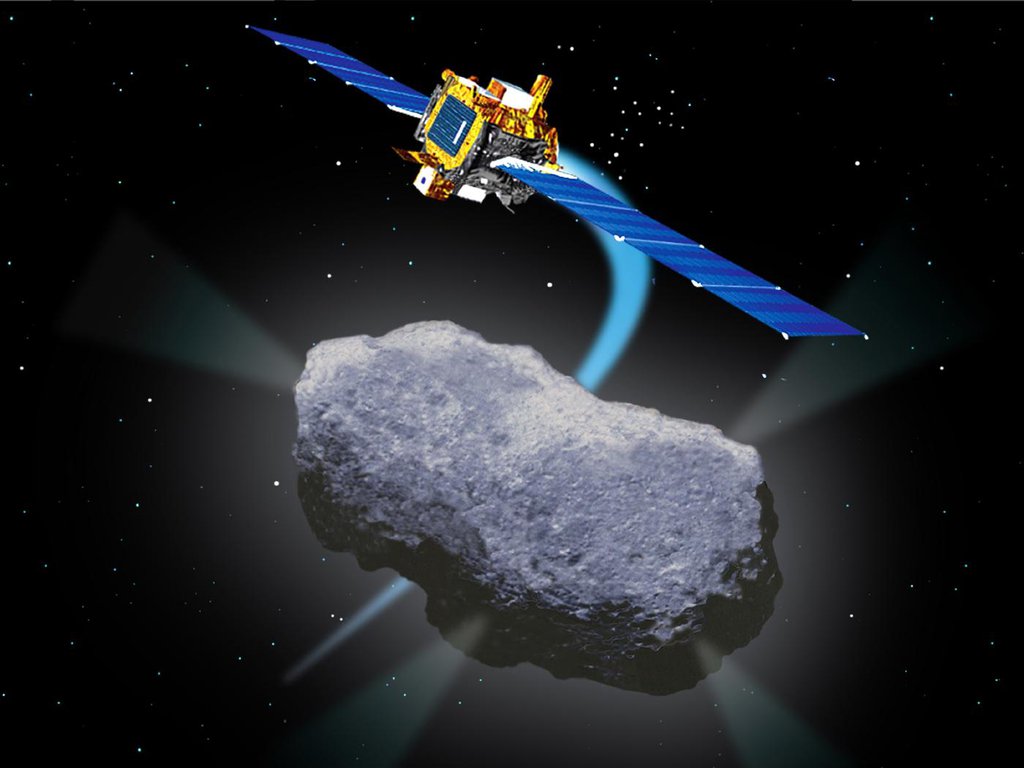 Like a slugger trying to pile up extra home runs after breaking the world record, a venerable NASA spacecraft already famed for bringing science fiction's ion-engine technology to life is preparing to fly daringly close to a comet on Saturday, Sept. 22.

Deep Space 1, which has already completed a highly successful mission testing a number of advanced spacecraft technologies, will attempt to pass inside the mostly unknown environment just 2,000 kilometers (about 1,200 miles) from the nucleus of comet Borrelly at 2230 Universal time (3:30 p.m. PDT) on Sept. 22.

"It has been a tremendously rewarding effort for the small Deep Space 1 team to keep this aged and wounded bird aloft," said Dr. Marc Rayman, project manager of Deep Space 1 at NASA's Jet Propulsion Laboratory, Pasadena, Calif. "Its mission to test new technologies is already highly successful and any science we get at the comet will be a terrific bonus."

By the time of the flyby Deep Space 1 will have completed three times its intended lifetime in space and its primary mission to test ion propulsion and 11 other high-risk, advanced technologies in September 1999. NASA extended the mission, taking advantage of the ion propulsion and other systems to target a chancy but exciting encounter with Borrelly.

The spacecraft may tell us more about comets and their place in the solar system. The robotic explorer will attempt to investigate the comet's environment when it tries to fly through the cloud of gas and dust surrounding the comet's nucleus, known as the coma.

The risks involved in gathering science data are very high, so results of this latest venture are unpredictable. The spacecraft will be traveling through a cloud of gas, dust and comet pieces to collect its data. Since Deep Space 1 wasn't built to go to a comet, it does not carry a protective shield. "We expect to be hit by debris from the comet, and at 16.5 kilometers per second (about 36,900 mph), even a tiny particle might prove fatal," said Rayman. "But this is an adventure too exciting to pass up."

If all goes well, scientists will use the comet chaser's measurements to find out the nature of Borrelly's surface and to measure and identify the gases coming from the comet. The spacecraft will also attempt to measure the interaction of solar wind with the comet, a process that leads to formation of the beautiful tail.

Borrelly makes a good target for study now, as it is just 1.34 astronomical units (about 200 million kilometers or 125 million miles) from the Sun -- the closest it will get for another seven years. The Sun's heat will make the gases escaping from the nucleus flow faster and more thickly, so they will be easier to study. The icy nucleus and the spacecraft will flash past each other at 16.5 kilometers per second (more than 36,900 miles per hour).

The flight team is also hoping that Deep Space 1 will have enough gas to get to the comet. The long-lived spacecraft keeps itself pointed correctly by firing small thrusters fueled by hydrazine gas. When the hydrazine runs out, Deep Space 1 will be unable to keep itself pointed correctly, and the spacecraft will die. The flight team has an estimate of how much gas is left, but a few hours' worth of gas could make all the difference in the comet encounter.

As it approaches the center of the coma, the spacecraft will face its greatest challenge: to obtain pictures and infrared measurements of the nucleus. Deep Space 1 can't tell exactly where the nucleus is or what it will look like. The craft will have to locate the nucleus on its own and try to point the camera toward it as it streaks by.

In late 1999, Deep Space 1 lost its star tracker, which helps determine the spacecraft's orientation. Faced with what could have been a mission-terminating injury, the controllers performed a spectacular ultra-long-distance rescue. They reconfigured the spacecraft to use the photographic camera to orient itself by the stars around it.

The camera cannot align the spacecraft and snap photos of Borrelly at the same time. Instead, Deep Space 1 will have to rely on its fiber-optic gyroscopes to help maintain its orientation. But the gyros are not accurate enough by themselves, so engineers designed complex new software to help the camera stay pointed at the comet's nucleus during the critical few minutes that the probe will be close enough to try to get a view of it.

More information can be found online at http://nmp.jpl.nasa.gov/ds1/

Deep Space 1 was launched in October 1998 as part of NASA's New Millennium Program, which is managed by JPL for NASA's Office of Space Science, Washington. The California Institute of Technology in Pasadena manages JPL for NASA.