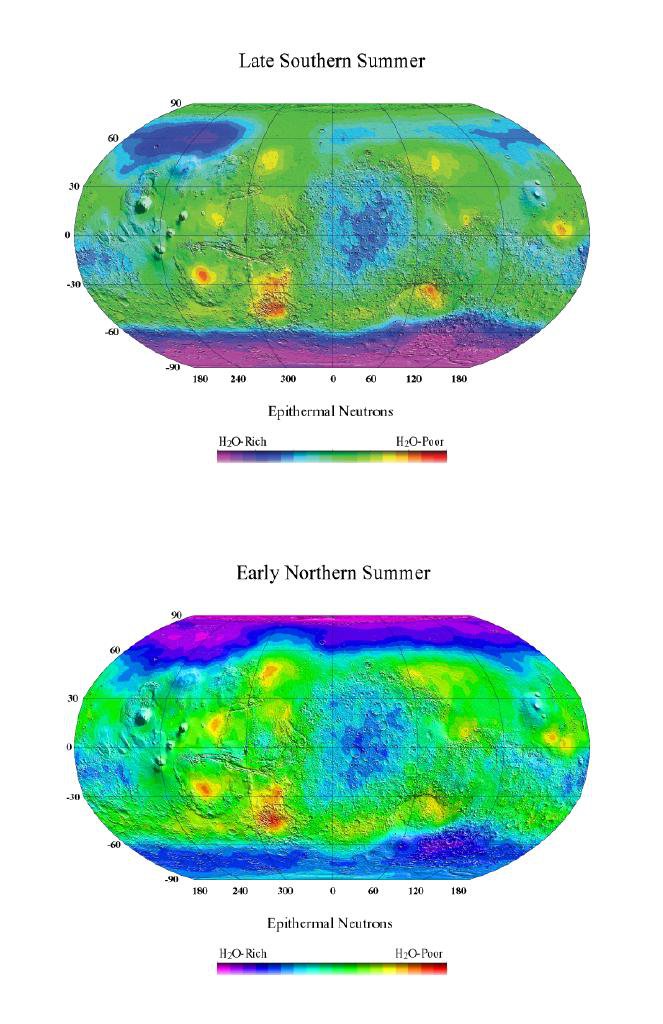 These two views of Mars were made with data taken by the neutron spectrometer component of NASA's Mars Odyssey gamma ray spectrometer suite. These maps show epithermal neutron flux, which is sensitive to the amount of hydrogen present.

The first view was made shortly after the Mars Odyssey science mission began in Feb. 2002, during late summer in the south. The magenta region in the south is due to large amounts of water ice buried a fraction of a meter beneath the surface. The amount of ice is approximately 60 percent by volume. At that time the buried ice in the north was not visible because it was covered with a thick cap of carbon dioxide (dry-ice) frost.

JPL, a division of the California Institute of Technology in Pasadena, manages the 2001 Mars Odyssey mission for NASA's Office of Space Science in Washington, D.C. Investigators at Arizona State University in Tempe, the University of Arizona in Tucson and NASA's Johnson Space Center,Houston, operate the science instruments. The gamma-ray spectrometer was provided by the University of Arizona in collaboration with the Russian Aviation and Space Agency, which provided the high-energy neutron detector, and the Los Alamos National Laboratories, New Mexico, which provided the neutron spectrometer. Lockheed Martin Astronautics, Denver, is the prime contractor for the project, and developed and built the orbiter. Mission operations are conducted jointly from Lockheed Martin and from JPL.