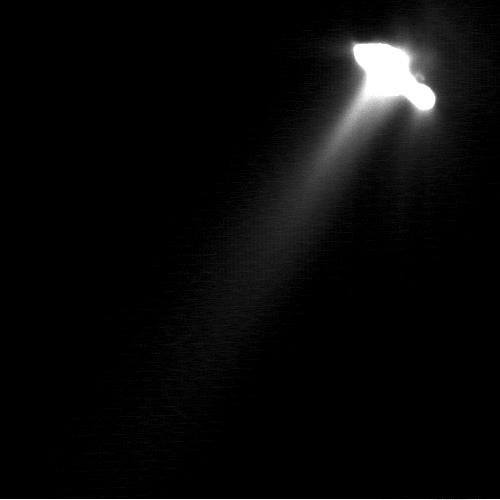 This very long exposure was taken by NASA's Deep Space 1 to show detailed structures in the faint parts of comet Borrelly's inner coma. As a result, the nucleus has been greatly over-exposed and its shape appears distorted. The main jet extends to the lower right about 30 degrees off the Sun-line. Faint structures in the coma stretch from the nucleus in all directions. The surface of Borrelly is composed of a mixture of dust and water ice, and as the comet approaches the Sun the ice sublimes. Dust carried outward by expanding gas makes the jets visible.

Deep Space 1 completed its primary mission testing ion propulsion and 11 other advanced, high-risk technologies in September 1999. NASA extended the mission, taking advantage of the ion propulsion and other systems to undertake this chancy but exciting, and ultimately successful, encounter with the comet. More information can be found on the Deep Space 1 home page at http://nmp.jpl.nasa.gov/ds1/ .