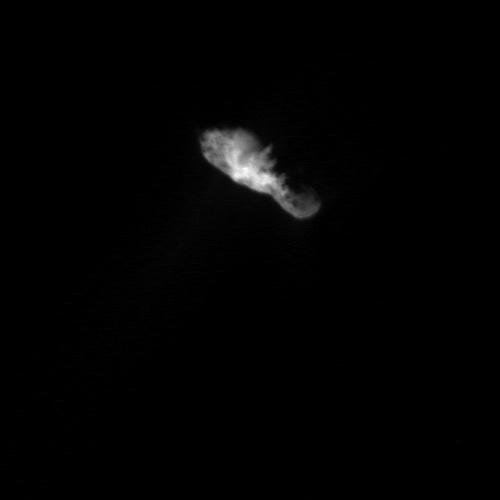 In this Deep Space 1 image of comet Borrelly, sunlight illuminates the bowling-pin shaped nucleus from directly below. At this distance, many features become vivid on the surface of the nucleus, including a jagged line between day and night on the comet, rugged terrain on both ends with dark patches, and smooth, brighter terrain near the center. The smallest discernible features are about 110 meters (120 yards) across.

Deep Space 1 completed its primary mission testing ion propulsion and 11 other advanced, high-risk technologies in September 1999. NASA extended the mission, taking advantage of the ion propulsion and other systems to undertake this chancy but exciting, and ultimately successful, encounter with the comet. More information can be found on the Deep Space 1 home page at http://nmp.jpl.nasa.gov/ds1/.