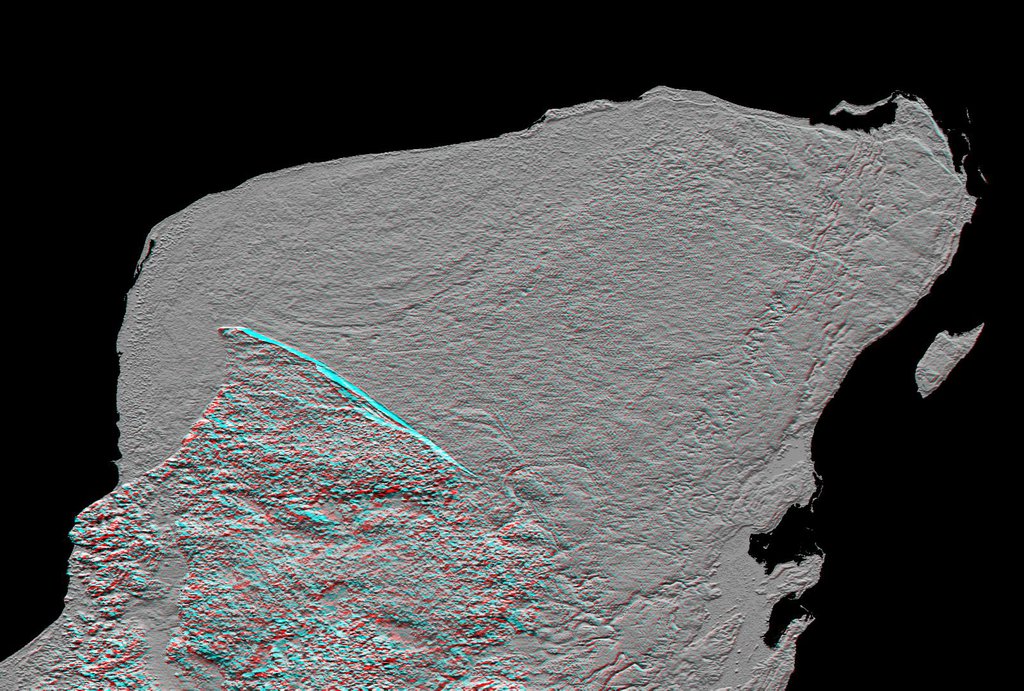 This anaglyph (stereoscopic view) of Mexico's Yucatan Peninsula was generated entirely from Shuttle Radar Topography Mission (SRTM) data, and shows a subtle but distinctive indication of the Chicxulub impact crater. Most scientists now agree that this impact was the cause of the Cretatious-Tertiary extinction, the event 65 million years ago that marked the demise of the dinosaurs as well as the majority of life then on Earth. The crater's rim is marked by a shallow semicircular depression arcing about an offshore center point in the upper left of the picture. (The arcing depression is just above the blue line, when viewed with the naked eye.) This depression, or trough, only about 3 to 5 meters (10 - 15 feet) deep and about 5 kilometers (3 miles) wide, was likely caused by collapse of limestone caverns preferentially above the crater rim, resulting in an arcing chain of sinkholes. The limestone that covers most of the Yucatan Peninsula post-dates the impact crater. However, the crater pattern apparently controls the subsidence pattern just enough to show through.

This anaglyph was created by deriving a shaded relief image from the SRTM data, draping it back over the SRTM elevation model, and then generating two differing perspectives, one for each eye. Illumination is from the north (top). When viewed through special glasses, the anaglyph is a vertically exaggerated view of the Earth's surface in its full three dimensions. Anaglyph glasses cover the left eye with a red filter and cover the right eye with a blue filter. The total relief (range of elevations) across this entire image is less than 300 meters (1000 feet).

Elevation data used in this image were acquired by the Shuttle Radar Topography Mission (SRTM) aboard the Space Shuttle Endeavour, launched on Feb. 11, 2000. SRTM used the same radar instrument that comprised the Spaceborne Imaging Radar-C/X-Band Synthetic Aperture Radar (SIR-C/X-SAR) that flew twice on the Space Shuttle Endeavour in 1994. SRTM was designed to collect 3-D measurements of the Earth's surface. To collect the 3-D data, engineers added a 60-meter (approximately 200-foot) mast, installed additional C-band and X-band antennas, and improved tracking and navigation devices. The mission is a cooperative project between NASA, the National Imagery and Mapping Agency (NIMA) of the U.S. Department of Defense and the German and Italian space agencies. It is managed by NASA's Jet Propulsion Laboratory, Pasadena, Calif., for NASA's Earth Science Enterprise, Washington, D.C.