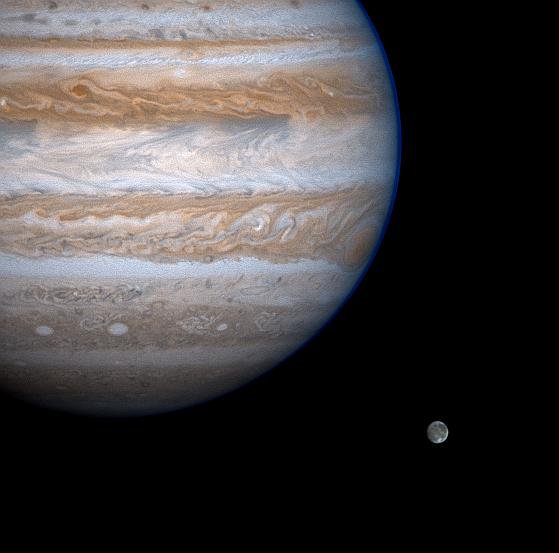 Jupiter casts a baleful eye toward the moon Ganymede in this enhanced-contrast image from NASA's Cassini spacecraft.

Jupiter's "eye', the Great Red Spot, was captured just before disappearing around the eastern edge of the planet. The furrowed eyebrow above and to the left of the spot is a turbulent wake region caused by westward flow that has been deflected to the north and around the Red Spot. The smallest features visible are about 240 kilometers (150 miles) across.

Within the band south of the Red Spot are a trio of white ovals, high pressure counterclockwise-rotating regions that are dynamically similar to the Red Spot. The dark filamentary features interspersed between white ovals are probably cyclonic circulations and, unlike the ovals, are rotating clockwise.

Jupiter's equatorial zone stretching across the planet north of the Spot appears bright white, with gigantic plume clouds spreading out from the equator both to the northeast and to the southeast in a chevron pattern. This zone looks distinctly different than it did during the Voyager flyby 21 years ago. Then, its color was predominantly brown and the only white plumes conspicuous against the darker material beneath them were oriented southwest-to-northeast.

Ganymede is Jupiter's largest moon, about 50 percent larger than our own Moon and larger than the planet Mercury. The visible details in this image are different geological terrains. Dark areas tend to be older and heavily cratered; brighter areas are younger and less cratered. Cassini images of Ganymede and Jupiter's other large moons taken near closest approach on Dec. 30 will have resolutions about four times better than that seen here.

This image is a color composite of ones taken with different filters by Cassini's narrow-angle camera on Nov. 18, 2000, processed to enhance contrast. Cassini is a cooperative project of NASA, the European Space Agency and the Italian Space Agency. The Jet Propulsion Laboratory, a division of the California Institute of Technology in Pasadena, manages the Cassini mission for NASA's Office of Space Science, Washington, D.C.