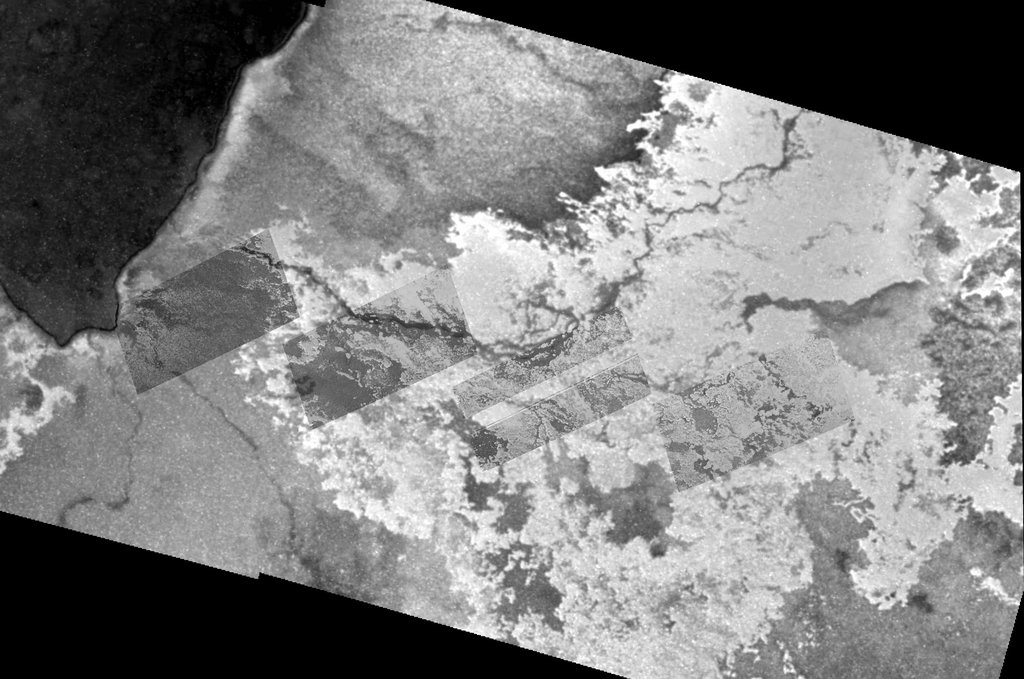 Clues about how lava spreads great distances on Jupiter's volcanic moon Io come from high-resolution views taken by NASA's Galileo spacecraft of a lava channel flowing out of Emakong Patera near Io's equator.

The lava channel is dark and runs to the right from the dark patera, or large depression, at the left of this mosaic. The mosaic sets several high-resolution images (30 meters or 100 feet per picture element) into the context of lower-resolution images (150 meters or 490 feet per picture element). Galileo took the high-resolution ones during a close flyby of Io on Oct. 15, 2001. The context images of the Emakong Patera region were acquired during a November 1999 flyby.

The 1999 images showed a dark channel though which molten material once fed a broad, bright lava flow that extended for hundreds of kilometers or miles. Those images raised questions about how lava could travel so far. The new images show that the lava channel is roofed over in several places, indicating that an insulating cover grew over parts of the channel, allowing the lava to move farther before freezing. More puzzling is the intimate mixing of bright and dark material in the lava flow. The liquids might have been a combination of molten rock and sulfur or might have been just sulfur, which has black, red, orange and yellow forms. One possibility is that the material that erupted from the volcano was molten rock that melted an underlying layer of sulfur. The molten sulfur could then have oozed up through the solidifying lava, producing the mottled surface seen here.

North is to the top of the picture. The Sun illuminates the surface from almost directly behind the spacecraft, so the brightness variations in the image are due to differences in the brightness of surface materials, not to shadows. The view is centered at 4.6 degrees south latitude and 117.5 degrees west longitude.

The Jet Propulsion Laboratory, a division of the California Institute of Technology in Pasadena, manages the Galileo mission for NASA's Office of Space Science, Washington, D.C. Additional information about Galileo and its discoveries is available on the Galileo mission home page at http://galileo.jpl.nasa.gov. Background information and educational context for the images can be found at http://galileo.jpl.nasa.gov/gallery/io.cfm.