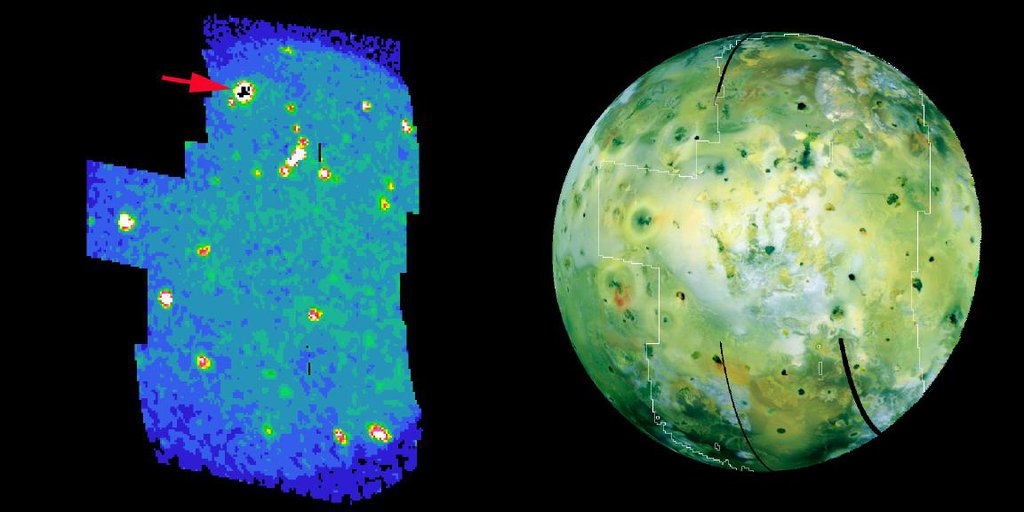 The bright, new hot spot (arrow) in Io's high northern latitudes is the source of a towering volcanic plume detected in new images taken by Galileo's camera. Snowflake-like particles of clumped sulfur-dioxide molecules from the plume were caught by the plasma-science instrument onboard the spacecraft.

Beginning about two hours after the spacecraft passed within 194 kilometers (120 miles) of Io's surface, Galileo's near-infrared mapping spectrometer recorded this image of most of the sunlit disc of the large, sizzling moon. The image shows the brightness of features at a wavelength of 4.4 microns, which detects heat from Io's many volcanic eruptions. An earlier image from Galileo's camera showing the same face of Io (right) is included for correlating the heat-sensing infrared data with geological features apparent in visible wavelengths.

Many volcanic hot spots appear in the infrared image as bright regions: yellow to red to white, in order of increasing intensity. The brightest hot spot in the northern hemisphere, indicated by the arrow, was so vigorous at the time of the observation that some pixels (shown in black) were saturated. This hot spot was not a previously known volcano. Io has 108 known hot spots, 10 of which were discovered from this observation. Most of the newly discovered ones are too faint to show up in this map, but their thermal signatures can be detected by examining each location's infrared data at more than one wavelength.

The Jet Propulsion Laboratory, a division of the California Institute of Technology in Pasadena, manages the Galileo mission for NASA's Office of Space Science, Washington, D.C. Additional information about Galileo and its discoveries is available on the Galileo mission home page at http://solarsystem.nasa.gov/galileo/.