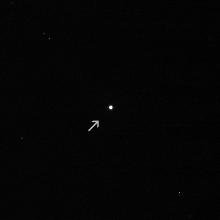 A series of wide angle and narrow angle images, through a variety of spectral and polarizing filters, was taken of the asteroid between 7 and 5.5 hours before closest approach, from a distance of 1.6 million km, in the hopes of determining the body's size, reflectivity, asteroid type and possibly its rotation period. The face of Masursky seen by the Cassini Imaging Science Subsystem (ISS) at a Sun-asteroid-spacecraft angle of 90 degrees has been measured to be roughly 15 - 20 km in diameter, assuming a spherical shape. Preliminary determination of its reflectivity indicates that it may not, in fact, be an S-type asteroid like Gaspra, Ida and Eros, a puzzling result given its dynamical association with the Eunomia family of S-type asteroids. Examination and analysis of the remaining images may settle this matter as well as place limits on the body's rotation period.

The asteroid is named for renowned planetary geologist Harold Masursky (1923-1990), a major participant in the historic Mercury and Apollo planetary programs, the Viking mission to Mars and the Voyager mission to outer solar system.

The image above is the first wide angle (WA) image taken of Masursky on January 23, 2000 at 3:01 UTC (full resolution version). In this 32 second exposure, the cameras were continuously pointed to Masursky which was traveling roughly right to left at 0.2 WA pixels/sec (about 12 microradians/sec) across the constellation of Aquila. The stars in this 3.5 degree field of view are streaked due to this target-motion compensation. Some of the streaks and point-like sources in this frame are in fact the images left by cosmic rays which hit the CCD of the camera during the exposure.

This narrow angle 1.2 second exposure was shuttered simultaneously with the wide angle image above, and is a factor of ten higher in resolution (full resolution version) . It is from images like this that the size of Masursky was determined. Some of the streaks and point-like sources in this 0.35 degree frame are infect the images left by cosmic rays which hit the camera's CCD. The imaging data were processed and released by the Cassini Imaging Central Laboratory for Operations (CICLOPS) at the University of Arizona's Lunar and Planetary Laboratory, Tucson, AZ.

Cassini, launched in 1997, is a joint mission of NASA, the European Space Agency and Italian Space Agency. The mission is managed by NASA's Jet Propulsion Laboratory, Pasadena, CA, for NASA's Office of Space Science, Washington DC. JPL is a division of the California Institute of Technology, Pasadena, CA.