The Mysterious Martian Mountains of Mitchel 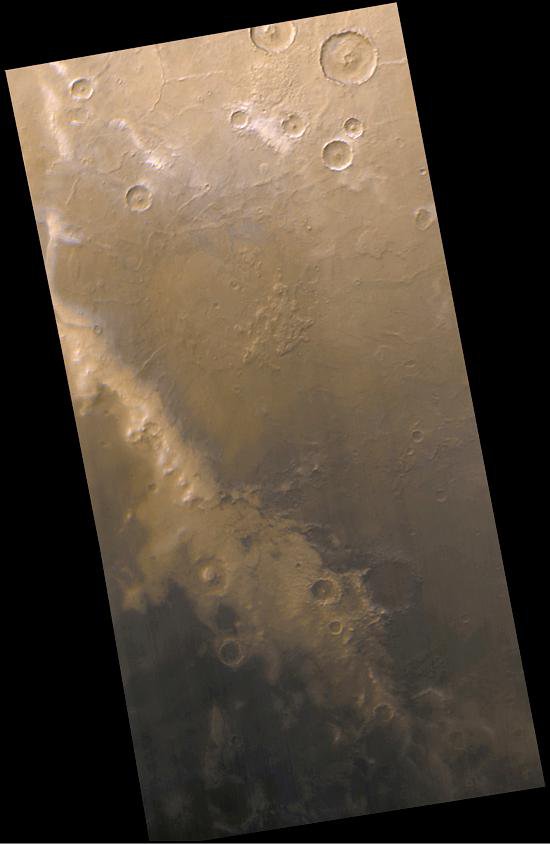 This Mars Global Surveyor (MGS) Mars Orbiter Camera (MOC) image covers an 800 by 300 km (500 by 190 mi) area located deep within the boundary of the seasonal south polar frost cap of Mars. Centered at 70°S, 320°W, this view--taken in early spring when sunlight has just begun to shine on the region for the first time in many months--includes a bright region (diagonal from center-left to lower right) known for nearly two centuries as the "Mountains of Mitchel." This feature was named for Ormsby McKnight Mitchel (1809-1862), an astronomer at the University of Cincinnati, Ohio, who discovered it while observing Mars through a telescope in 1846. Mitchel noticed that this area is typically "left behind" as a bright peninsula when the rest of the polarcap recedes past this area later in the spring.

Mitchel deduced that this area might be mountainous because it seemed analogous to the snow that is left on Earth's mountain ranges in late spring and into summer. Snow can remain on high peaks because the air temperature decreases with elevation (or altitude). MGS Mars Orbiter Laser Altimeter (MOLA) observations of this region show the bright "Mountains of Mitchel" to be a somewhat elevated region of rough, heavily cratered southern highlands. However, the "Mountains of Mitchel" do not appear to be mountains-there are other areas nearby at similar elevation that do not retain frost well into southern spring. Part of the Mountains of Mitchel feature includes a prominent, south-facing scarp (at center-left) that would tend to retain frost longer in the spring because it is somewhat protected from sunlight (which comes from the north). The persistence of frost on the Mountains of Mitchel remains mysterious, but new observations from the MGS MOC are helping to unravel the story. Thus far, it seems that the frost here--for whatever reason--tends to be brighter than frost in most other places within the polar cap. This brighter frost reflects sunlight and thus sublimes more slowly than adjacent, darker frost surfaces.

This color picture was compiled from MOC red and blue wide angle images. North is up and sunlight illuminates the scene from the upper left. The surface does not appear to be white--as might be expected for frost--because of dust both on the surface and in the atmosphere, as well dark sand that was being exposed from beneath the retreating frost at the time that the picture was taken.