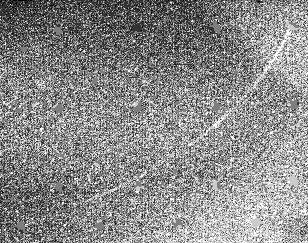 The Voyager spacecraft was 8.6 million kilometers (5.3 million miles) from Neptune when it took this 61 second exposure through the clear filter with the narrow angle camera on August 19, 1989. The Voyager cameras were programmed to make a systematic search for faint ring arcs and new satellites. The bright upper corner of the image is due to a residual image from a previous long exposure of the planet. The portion of the arc visible here is approximately 35 degrees in longitudinal extent, making it approximately 38,000 kilometers (24,000 miles) in length, and is broken up into three segments separated from each other by approximately 5 degrees. The trailing edge is at the upper right and has an abrupt end while the leading edge seems to fade into the background more gradually. This arc orbits very close to one of the newly discovered Neptune satellites, 1989N4. Close-up studies of this ring arc will be carried out in the coming days which will give higher spatial resolution at different lighting angles. The Voyager Mission is conducted by JPL for NASA's Office of Space Science and Applications.