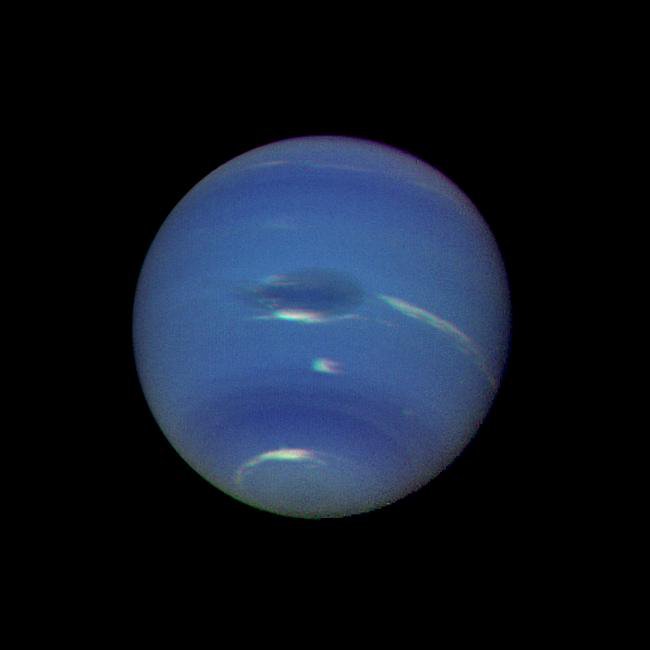 Neptune's blue-green atmosphere is shown in greater detail than ever before by the Voyager 2 spacecraft as it rapidly approaches its encounter with the giant planet. This color image, produced from a distance of about 16 million kilometers, shows several complex and puzzling atmospheric features. The Great Dark Spot (GDS) seen at the center is about 13,000 km by 6,600 km in size -- as large along its longer dimension as the Earth. The bright, wispy "cirrus-type" clouds seen hovering in the vicinity of the GDS are higher in altitude than the dark material of unknown origin which defines its boundaries. A thin veil often fills part of the GDS interior, as seen on the image. The bright cloud at the southern (lower) edge of the GDS measures about 1,000 km in its north-south extent. The small, bright cloud below the GDS, dubbed the "scooter," rotates faster than the GDS, gaining about 30 degrees eastward (toward the right) in longitude every rotation. Bright streaks of cloud at the latitude of the GDS, the small clouds overlying it, and a dimly visible dark protrusion at its western end are examples of dynamic weather patterns on Neptune, which can change significantly on time scales of one rotation (about 18 hours).