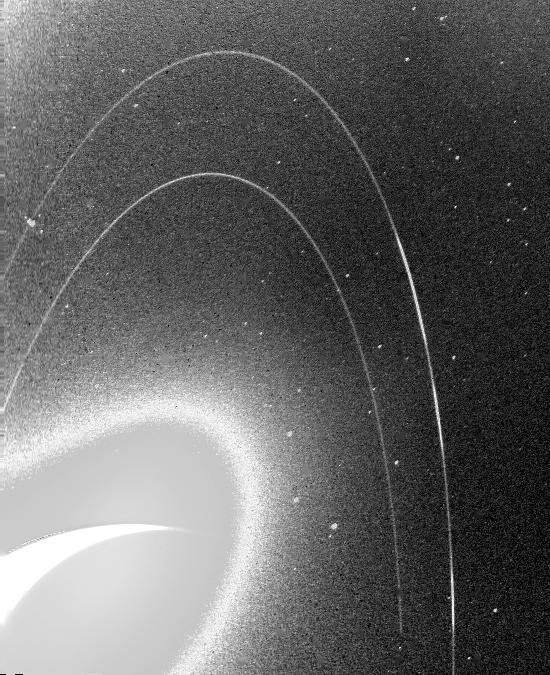 This wide-angle Voyager 2 image, taken through the camera's clear filter, is the first to show Neptune's rings in detail. The two main rings, about 53,000 km (33,000 miles) and 63,000 km (39,000 miles) from Neptune, are 5 to 10 times brighter than in earlier images. The difference is due to lighting and viewing geometry. In approach images, the rings were seen in light scattered backward toward the spacecraft at a 15-degree phase angle. However, this image was taken at a 135-degree phase angle as Voyager left the planet. That geometry is ideal for detecting microscopic particles that forward-scatter light preferentially. The fact that Neptune's rings are so much brighter at that angle means the particle-size distribution is quite different from most of Uranus' and Saturn's rings, which contain fewer dust-size grains. However, a few components of the Saturnian and Uranian ring systems exhibit forward-scattering behavior: The F ring and the Encke Gap ringlet at Saturn, and 1986U1R at Uranus. They are also narrow, clumpy ringlets with kinks, and are associated with nearby moonlets too small to detect directly. In this image, the main clumpy arc, composed of three features each about 6 to 8 degrees long, is clearly seen. This image was obtained when Voyager was 1.1 million km (683,000 miles) from Neptune. Exposure time was 111seconds. The Voyager Mission is conducted by JPL for NASA's Office of Space Science and Applications.