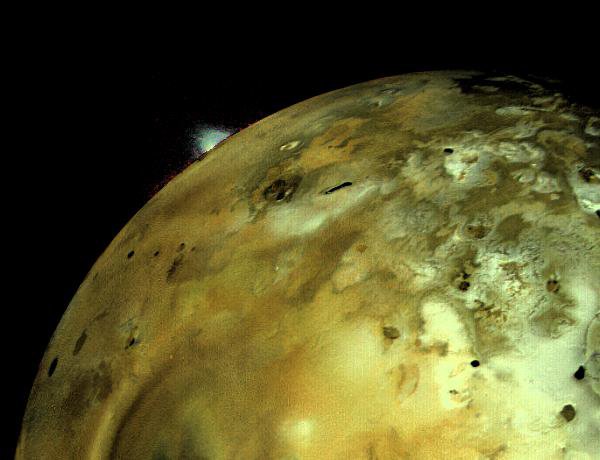 VOLCANIC EXPLOSION ON IO: Voyager 1 acquired this image of Io on March 4 at 5:30 p.m. (PST) about 11 hours before closest approach to the Jupiter moon. The distance to Io was about 490,000 kilometers (304,000 miles). An enormous volcanic explosion can be seen silhouetted against dark space over Io's bright limb. The brightness of the plume has been increased by the computer as it is normally extremely faint, whereas the relative color of the plume (greenish white) has been preserved. At this time solid material had been thrown up to an altitude of about 100 miles. This requires an ejection velocity from the volcanic vent of about 1200 miles per hour, material reaching the crest of the fountain in several minutes. The vent area is a complex circular structure consisting of a bright ring about 300 kilometers in diameter and a central region of irregular dark and light patterns. Volcanic explosions similar to this occur on the Earth when magmatic gases expand explosively as material is vented. On Earth water is the major gas driving the explosion. Because Io is thought to be extremely dry, scientists are searching for other gases to explain the explosion. JPL manages and controls the Voyager Project for NASA's Office of Space Science.