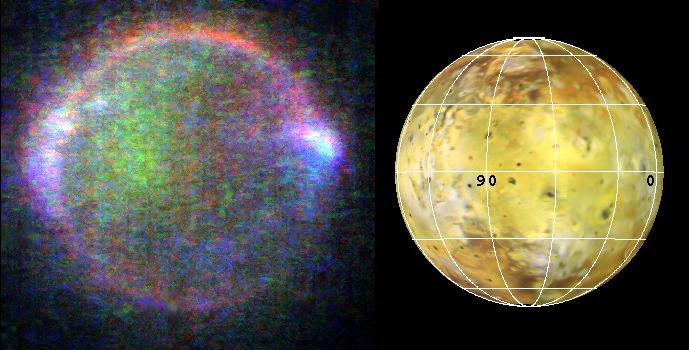 This eerie view of Jupiter's moon Io in eclipse (left) was acquired by NASA's Galileo spacecraft while the moon was in Jupiter's shadow. Gases above the satellite's surface produced a ghostly glow that could be seen at visible wavelengths (red, green, and violet). The vivid colors, caused by collisions between Io's atmospheric gases and energetic charged particles trapped in Jupiter's magnetic field, had not previously been observed. The green and red emissions are probably produced by mechanisms similar to those in Earth's polar regions that produce the aurora, or northern and southern lights. Bright blue glows mark the sites of dense plumes of volcanic vapor, and may be places where Io is electrically connected to Jupiter.

The viewing geometry is shown in the image on the right. North is to the top of the picture, and Jupiter is towards the right. The resolution is 13.5 kilometers (8 miles) per picture element. The images were taken on May 31, 1998 at a range of 1.3 million kilometers (800,000 miles) by Galileo's onboard solid state imaging camera system during the spacecraft's 15th orbit of Jupiter.

This image and other images and data received from Galileo are posted on the World Wide Web on the Galileo mission home page at http://galileo.jpl.nasa.gov. Background information and educational context for the images can be found at http://www.jpl.nasa.gov/galileo/sepo.