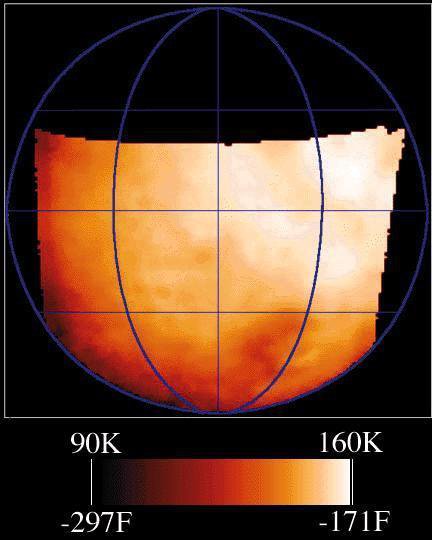 This map shows the temperatures for most of the surface of Ganymede made from data taken by the Photopolarimeter/Radiometer (PPR) instrument on June 26, 1996 as Galileo approached the sunlit side of the moon. The color bar shows the range of temperatures of this data, with the dark red being the coldest and white being the warmest. This is similar to the temperature forecast maps that you see on the evening news or in some newspapers. The difference between this map and one of Earth is that PPR measures the temperature of the surface (the ground), instead of air temperature. Ganymede is much colder than Earth, with these daytime temperatures ranging across the surface from 90 to 160 Kelvin (or -297 to -171 degrees Fahrenheit). Jupiter and its moons receive less than 1/30th the amount of sunlight that the Earth does, and Ganymede has essentially no atmosphere to trap heat. Ganymede's day is just over 7 Earth days long, the same time it takes to orbit Jupiter once.

To compare this temperature map to surface features of Ganymede, you can look at this Ganymede Image taken during the Ganymede 1 orbit. The PPR map covers almost the same area as the image but is rotated about 30 degrees to the west.

The image was taken with Galileo's PPR (Photopolarimeter-Radiometer) instrument on the spacecraft's seventh orbit around Jupiter, from a range of about 65,000 kilometers (40,389 miles). Surface temperatures derived from the strength of infrared radiation, as was done here, are called "brightness temperatures," and may be slightly in error.