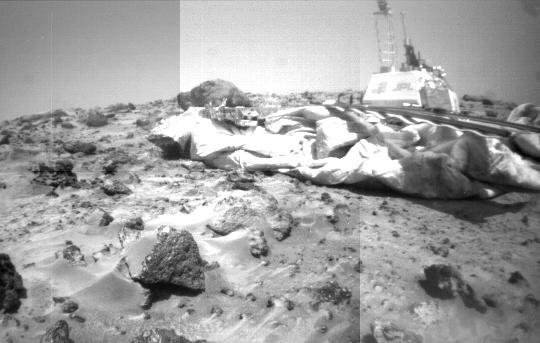 This mosaic of the Mars Pathfinder lander and Martian terrain was taken by the front camera on the Sojourner rover on Sol 39. The rover, positioned near the rock "Wedge" at left, has imaged the letters "JPL" and the American flag mounted on the side of the lander's electronics box. A large spread of deflated airbags are strewn around the lander's periphery, and the large rock Yogi, studied earlier in the mission by Sojourner's Alpha Proton X-Ray Spectrometer instrument, lies behind the airbags in the background. The front rover deployment ramp is at right, while the Imager for Mars Pathfinder mounted on its mast stands high at the top of the lander's electronics box.