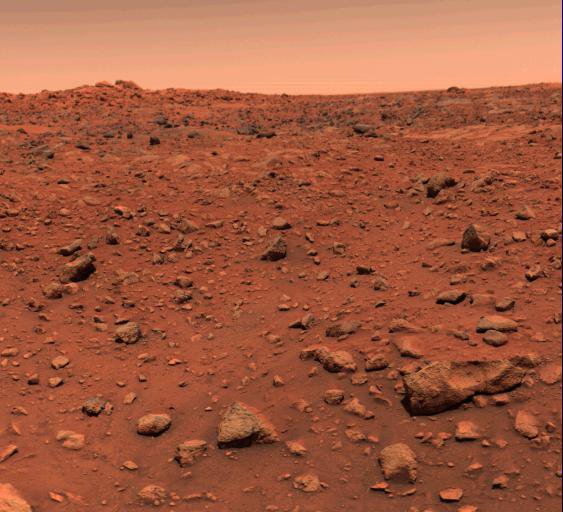 This color picture of Mars was taken July 21--the day following Viking l's successful landing on the planet. The local time on Mars is approximately noon. The view is southeast from the Viking. Orange-red surface materials cover most of the surface, apparently forming a thin veneer over darker bedrock exposed in patches, as in the lower right. The reddish surface materials may be limonite (hydrated ferric oxide). Such weathering products form on Earth in the presence of water and an oxidizing atmosphere. The sky has a reddish cast, probably due to scattering and reflection from reddish sediment suspended in the lower atmosphere. The scene was scanned three times by the spacecraft's camera number 2, through a different color filter each time. To assist in balancing the colors, a second picture was taken of z test chart mounted on the rear of the spacecraft. Color data for these patches were adjusted until the patches were an appropriate color of gray. The same calibration was then used for the entire scene.