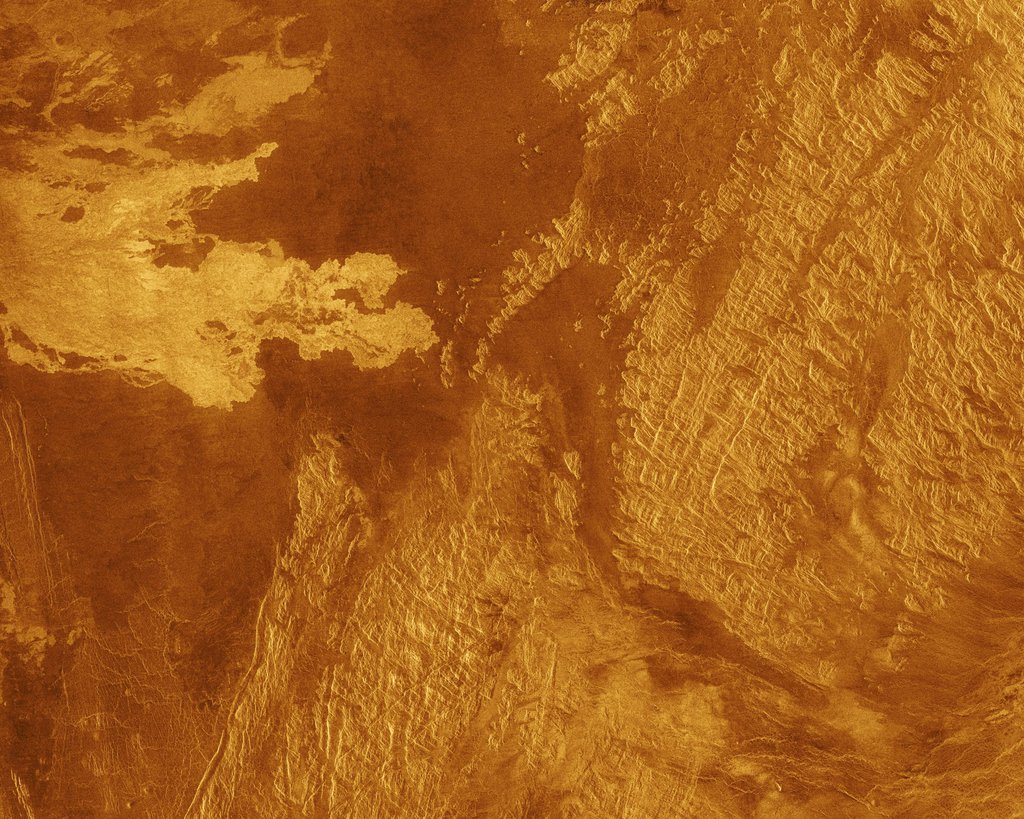 This false color Magellan image shows a portion of Eistla Regio (region) in the northern hemisphere of Venus, centered at 1 degrees south latitude, 37 degrees east longitude. The area is 440 kilometers (270 miles) wide and 350 kilometers (220 miles) long. This image was produced from Magellan radar data collected in Cycle 2 of the mission. Cycle 2 was completed January 15, 1992. The area was not imaged during the first cycle because of superior conjunction when the sun was between the Earth and Venus, preventing communication with the spacecraft. This image contains examples of several of the major geologic terrains on Venus and illustrates the basic stratigraphy or sequence of geologic events. The oldest terrain appears as bright, highly fractured or chaotic highlands rising out of the plains. This is seen in the right half of the image. The chaotic highlands, sometimes called tessera, may represent older and thicker crustal material and occupy about 15 percent of the surface of Venus. The fractured terrain in this region has a distinctly linear structure with a shear-like pattern. Plains surround and embay the fractured highland tessera. Plains are formed by fluid volcanic flows that may have once formed vast lava seas which covered all the low lying surfaces. Plains comprise more than 80 percent of the surface of Venus. The most recent activity in the region is volcanism that produced the radar bright flows best seen in the upper left quadrant of the image. The flows are similar, in their volcanic origin to the darker plains volcanics, but apparently have more rugged surfaces that more efficiently scatter the radar signal back to the spacecraft. The geologic sequence is early fracturing of the tessera, flooding by extensive plains lavas, and scattered less extensive individual flows on the plains surface. The simulated hues are based on color images recorded by the Soviet Venera 13 and 14 spacecraft.