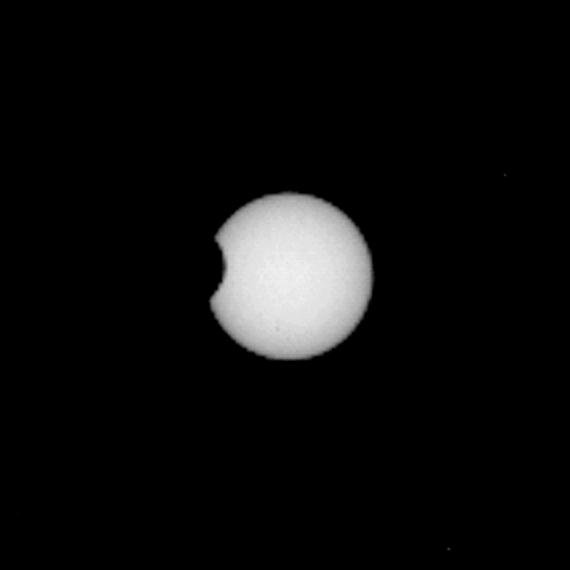 Mars has two small, asteroid-sized moons named Phobos and Deimos. From the point of view of the rover, located near the equator of Mars, these moons occasionally pass in front of, or "transit," the disk of the sun. These transit events are the Martian equivalent of partial solar eclipses on Earth because the outline of the moons does not completely cover the sun (in contrast, Earth's moon does block the entire sun during a total solar eclipse). These eclipses, like those on Earth, occur in predictable "seasons" a few times each Mars year.

As part of a multi-mission campaign, NASA's Curiosity rover is observing these transits, the first of which involved the moon Phobos grazing the sun's disk. The event was observed on Martian day, or sol, 37 (September 13, 2012) using Curiosity's Mast Camera, or Mastcam, equipped with special filters for directly observing the sun. In a series of high-resolution video frames acquired at about three frames per second for about two minutes, the outline of part of Phobos blocked about five percent of the sun.

This animation shows the transit as viewed by the Mastcam 100-millimiter camera (M-100) in nine frames. Another version of the animation is available (click on the image above), consisting of 20 frames taken by the Mastcam 34-millimeter camera (M-34), which has about one-third the resolution of the M-100. In total, 256 frames were taken by the M-100 and 384 frames for the M-34.

The transit was also observed by Curiosity's Rover Environmental Monitoring Stations (REMS) instrument, which saw about a five percent drop in the sun's ultraviolet radiation during the event.

Mission scientists use these events to very accurately determine the orbital parameters of the Martian moons. Phobos, for example, orbits very close to Mars and is slowly spiraling in to Mars because of tidal forces. These forces change the orbital position of Phobos over time, and accurate measurements of those changes can provide information about the internal structure of that moon and how it dissipates energy. Deimos orbits much farther away and is slowly spiraling out.

NASA's Mars Exploration Rover Opportunity will also attempt to observe a different set of Phobos and Deimos transits, seen from the other side of the planet, in Meridiani Planum.