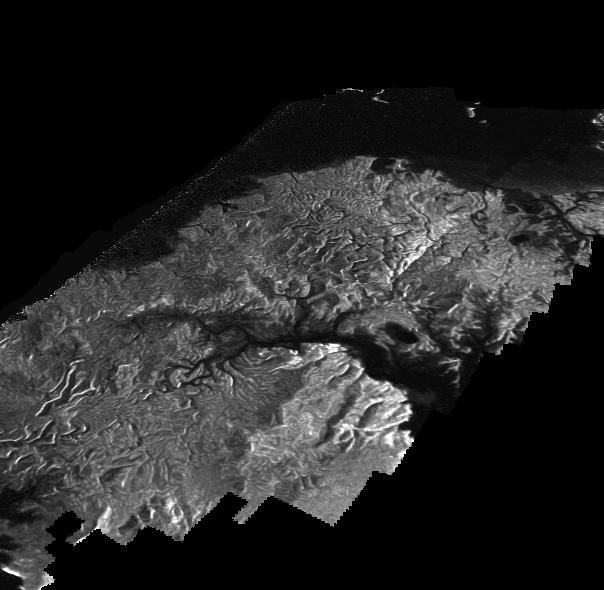 This Cassini Synthetic Aperture Radar (SAR) image is presented as a perspective view and shows a landscape near the eastern shoreline of Kraken Mare, a hydrocarbon sea in Titan's north polar region. This image was processed using a technique for handling noise that results in clearer views that can be easier for researchers to interpret. The technique, called despeckling, also is useful for producing altimetry data and 3-D views called digital elevation maps.

Scientists have used a technique called radargrammetry to determine the altitude of surface features in this view at a resolution of approximately half a mile, or 1 kilometer. The altimetry reveals that the area is smooth overall, with a maximum amplitude of 0.75 mile (1.2 kilometers) in height. The topography also shows that all observed channels flow downhill.

The presence of what scientists call "knickpoints" -- locations on a river where a sharp change in slope occurs -- might indicate stratification in the bedrock, erosion mechanisms at work or a particular way the surface responds to runoff events, such as floods following large storms. One such knickpoint is visible just above the lower left corner, where an area of bright slopes is seen.

The image was obtained during a flyby of Titan on April 10, 2007. A more traditional radar image of this area on Titan is seen in PIA19046.

The Cassini-Huygens mission is a cooperative project of NASA, the European Space Agency and the Italian Space Agency. NASA's Jet Propulsion Laboratory, a division of the California Institute of Technology in Pasadena, manages the mission for NASA's Science Mission Directorate, Washington. The Cassini orbiter was designed, developed and assembled at JPL. The radar instrument was built by JPL and the Italian Space Agency, working with team members from the United States and several European countries.