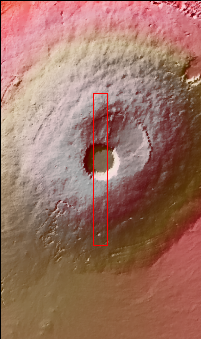 This VIS image shows a cross section of Pavonis Mons, including the central part of the smaller summit caldera (circular depression). On the top side of the caldera is a complex region of fault related collapse of the wall of the caldera. Several intersecting faults are visible there. The faults would have formed areas of weakness in the caldera wall, precipitating into gravity driven down slope movement of materials. This caldera is approximately 5km (3 miles) deep, much deeper that the larger caldera that surrounds the northern and eastern sides of the small caldera. Pavonis Mons, like the other large volcanoes in the region, is a shield volcano. Shield volcanoes are formed by lava flows originating near or at the summit, building up layers upon layers of lava. In shield volcanoes summit calderas are typically formed where the surface collapses into the void formed by an emptied magma chamber.

Pavonis Mons is one of the three aligned Tharsis Volcanoes. In order from north to south are Ascreaus Mons, Pavonis Mons and Arsia Mons. The three aligned volcanoes are located along a topographic rise in the Tharsis region. Along this trend there are increased tectonic features and additional lava flows that arose from the flanks of the volcanoes rather than the summit. Pavonis Mons is the smallest of the three volcanoes, rising 14 km (8 miles) above the mean Mars surface level with a width of 375 km (233 miles). Like most shield volcanoes the surface has a low profile. In the case of Pavonis Mons the average slope is only 4 degrees.